PADANG, Indonesia (CNN) -- The first school assembly since the earthquake was charged with emotion and grief. 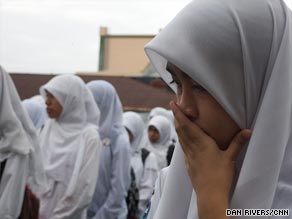 Students gather for the emotional assembly at their school in Padang, Indonesia.

Students at SMA1 High School in Padang have been arriving amid the ruins of their classrooms hoping life will get back to normal quickly.

They still don't know how many pupils were victims of the earthquake.

Only half the 800 students turned up Monday. But there was a gasp of shock as the vice principal informed them that one member of staff had been killed in the quake.

As prayers and a lament were sung in the yard, the emotion was too much for one teacher who fainted and was carried away.

Many students have stories of narrow escapes and cheating death by seconds. Haria Fitri told me she was taking a shower when suddenly the bathroom started shaking violently. She grabbed a towel and ran downstairs and jumped out of a window, just as her house collapsed behind her.

Many are clearly traumatized by what happened, mentioning how scared they are that another quake will again turn their world upside down.

The teachers too seem stunned by what's happened. Most of the classrooms here are full of rubble and lessons are now being conducted in a tent outside, provided by United Nations Children's Fund, or UNICEF.

17-year-old student Harris Putrareza, said: "When I see my school, very big destruction, I get a little sad, but I am very happy to be back to my school."

The school's English teacher, a warm, animated woman called Gustina said: "They feel very sad, they can't control their emotions, what pity our school is broken."

In some ways the very spirit of the school has been damaged. It was built in 1917 during the Dutch colonial period and has survived numerous earthquakes down the years. But this one ripped the place apart, leaving mountains of red bricks lying on the desks and huge gaping holes in the ceiling.

One building is simply too dangerous to enter and may have to be torn down.

Everywhere there are little reminders of the day the earth shook so violently: the trophy cabinet full of toppled sports awards, the covered walkways choked with smashed stone pillars.

The senior students are already wondering how they will cope when it comes to their important mid-term exams next week. The principal has announced a postponement, while they find a suitable room.

Slowly the students at this highly-acclaimed school will refocus on their studies, but no one will forget that day at the end of September when everything changed in Padang.

All About Indonesia • Earthquakes