NEW DELHI, India (CNN) -- Air India took two pilots and two cabin crew off-duty over allegations that they had a fist fight during an international flight with 106 passengers aboard, the state-run airline said Monday. 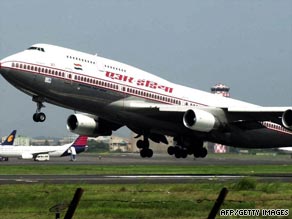 Faced with tough competition from private carriers, Air India has struggled with financial and image crises.

The scuffle allegedly took place on flight from the United Arab Emirates to New Delhi, while the plane flew over Pakistan.

An investigation had been launched into what Air India spokesman Jitender Bhargava called "charges and counter-charges."

In a police complaint made on landing Saturday, a 24-year-old flight attendant alleged a molestation attempt.

But pilots Ranbeer Arora and Aditya Chopra alleged that the molestation claim was an attempt to deflect attention from misbehavior by a male purser. Have you ever experienced poor crew behaviour on a flight?

"All the four have been de-rostered and an inquiry committee is examining versions of each of them," Bhargava said.

Faced with tough competition from private carriers, Air India has struggled with financial and image crises.

Rats have been spotted on two Air India international flights in less than a month, according to news reports.

An investigation in May revealed that the carrier had loaded a flight three passengers beyond capacity. Several employees were de-rostered as a result.

"Privatize Air India before it's too late," warned a column in the Hindustan Times newspaper Sunday.

"As long as the government runs Air India, it will continue to strangle it," columnist Vir Sanghvi wrote.

All About Air-India Ltd.