Group calls for release of American dad jailed in Japan

WASHINGTON (CNN) -- A handful of people rallied outside the Japanese Embassy on Saturday to show support for an American man who is jailed in Japan, accused of trying to kidnap his own children. 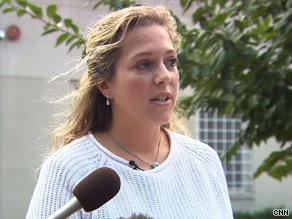 Amy Savoie calls on Japan to release her husband during a rally outside the Japanese Embassy in Washington.

During the demonstration, Christopher Savoie's wife, Amy, along with others from the Children's Rights Council of Japan -- a group that advocates visitation for both parents in divorce cases, and which organized Saturday's event -- called for Savoie's release.

"It makes me feel wonderful to know that these people are calling him a hero, saying he's brave, and I just hope he can come home and say thank you to all these people who've supported him," Amy Savoie told CNN.

Christopher Savoie, 38, a Tennessee native and naturalized Japanese citizen, allegedly abducted his two children -- 8-year-old Isaac and 6-year-old Rebecca -- as his ex-wife walked them to school Monday in a rural town in southern Japan, police in Japan said.

With the children, Savoie headed for the nearest U.S. consulate in the city of Fukuoka to try to obtain passports for them, screaming at guards to let him in the compound. Savoie was steps away from the front gate but still standing on Japanese soil when Japanese police arrested him.

Amy Savoie said the separation is taking a toll on her.

"I just wish I could talk to him, but I am forced to live with the fact that I can't talk to him. So I have to soothe myself and comfort myself with what he would say right now, and I just hope he's doing well," she said.

Japanese law, however, recognizes Noriko Savoie as the primary custodian. The law there also follows a tradition of sole-custody divorces. When the couple splits, one parent typically makes a complete and lifelong break from the children.

Complicating the matter further is the fact that the couple still are considered married in Japan because they never divorced there, police said Wednesday. And, police said, the children are Japanese and have Japanese passports.

A 1980 Hague Convention standardized laws on international child abduction, but Japan is not a party to that agreement.

If a child in Japan is taken against the wishes of the recognized Japanese parent, Japanese law considers the person who took the child an abductor.

Christopher Savoie will be jailed for at least 10 days while Japanese prosecutors sort out details of the case.