LEONE, American Samoa (CNN) -- Another earthquake struck Wednesday near the Samoan islands, an area already devastated by earthquake and tsunami damage which killed more than 130 people. 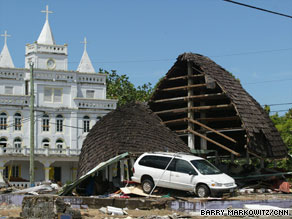 A traditional Samoan fale is destroyed Wednesday in the devastated village of Leone.

The quake did not trigger a tsunami warning, according to the Pacific Tsunami Warning Center.

It followed an 8.0-magnitude earthquake which hit the small cluster of Samoan islands early Tuesday triggering a tsunami.

At least 139 people are confirmed dead as a consequence of Tuesday's quake and tsunami. They include 22 people killed in American Samoa, 110 in Samoa and seven in Tonga, according to officials on the islands.

A huge emergency effort was continuing late Wednesday in the Samoan islands and officials warned that the death toll could rise as rescue workers start to reach outlying villages and discover new casualties.

Watch the tsunami take over the street »

Survivors like Ropati Opa were trying to find ways to cope. The massive waves had destroyed his home, store and gas station in the village of Leone on the southwest coast of American Samoa.

U.S. President Barack Obama addressed the disaster at an event Wednesday in Washington.

"To aid in the response," he said, "I've declared this a major disaster to speed the deployment of resources and FEMA ... is working closely with emergency responders on the ground, and the Coast Guard is working to provide immediate help to those in need.

"We also stand ready to help our friends in neighboring Samoa and throughout the region, and we'll continue to monitor this situation closely as we keep the many people who have been touched by this tragedy in our thoughts and in our prayers," Obama said.