Afghan women hiding for their lives

KABUL, Afghanistan (CNN) -- Shameen's brown eyes seem lost as she thinks about the one day she wants to forget, but it is all she can think about. 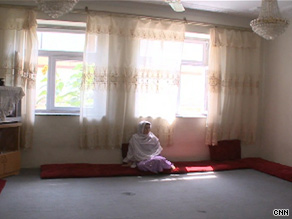 Nearly 90 percent of Afghan women suffer from domestic abuse, according to the U.N.

Still traumatized, she recounts the events that led her to a safe house in Kabul.

She was raped and nearly stabbed to death by her husband just seven days before we met her.

Her lips are quivering and her eyes full of fear.

"He forced himself on me," she said. "All I could do was scream."

She was married off 15 years ago when she was a teenager.

Throughout those years she was tortured and abused, suffering daily beatings with an electrical wire or the metal end of a hammer.

This was her normal life.

"He chased after me with a hammer. He said if I made any noise he would put holes through me," Shameen said.

Shameen and her husband could not conceive a child. And in Afghan society, it seems, the blame always falls on the woman.

After one severe beating, she ran from her home and to the police station. Her husband promised the police he would not attack her anymore, so she gave in and agreed to go back home with him.

Days later, Shameen's husband took her on a trip to visit her sister's grave -- a 15-year-old sister who was burned to death for displeasing her husband.

Shameen says her younger sister was 11 years old when she was forced to marry an older man. He would beat and abuse her until one day he killed her.

As Shameen walked along the graveyard with her husband he took her near a shrine where he forced her to the ground, lifted her burqa and raped her. He then threatened her with a knife and asked her who was going to help her now. She was screaming as he slashed her throat and body.

A passerby saved her.

Now, she has no one to turn to -- not even her own parents. In their eyes, she has brought them shame, an offense punishable by death.

In Afghanistan, a woman is blamed for the injustices she must live through. Shameen says when her sister was killed, her parents turned a blind eye.

She misses her parents and siblings but knows she can never see them again.

"They'll kill me," she said without flinching.

She now hides in a safe house, isolated and alone. Like most Afghan women, she has lost all hope.

Afghanistan is a country where for centuries women have been considered property -- not equals, like the constitution states. They are often beaten, raped and even sold to the highest bidder. There are very few places women can turn to.

Authorities brought Shameen to a shelter run by Women for Afghan Women (WAW). The organization started in New York to provide humanitarian assistance to women who do not know they have rights.

Watch Abawi's report from the shelter »

In this safe house, WAW is currently providing care, security and an education for 54 women and children.

Nearly 90 percent of Afghan women suffer from domestic abuse, according to the United Nations Development Fund for Women.

Despite that, there are less than a dozen shelters like this one in Afghanistan, usually run by non-governmental organizations.

Abusers are rarely prosecuted or convicted, and most women are afraid to say anything.

Naderi is an Afghan-American who grew up in New York and has returned to Afghanistan to work with other women in hopes of bringing a change, although she said it will take generations.

"They see their mothers being beaten, they see their sisters their aunts, everybody," Naderi said. "So that's what they expect."

It is not just women who suffer.

Hosnia is a smiling eight year old who likes to play with her toys and other young girls at the shelter. She rocks her body on the mat where she sits, the rocking swaying her green plastic earrings as she talks with a muffled sweet voice.

"I have a difficulty," she said, when asked what she is doing at the shelter.

Her smile fades as she remembers the circumstances that brought her here.

Just three years ago when Hosnia was five, she was raped and left for dead outside her home in northern Afghanistan.

Her father found her bloody body floating in a creek. She spent a month in the hospital as her little body recovered from that brutal assault.

Out of love and fear for his daughter's life, Hosnia's dad brought her to this safe house.

According to WAW, her rapist was a young man from an affluent family and quickly released from jail because of bribes and family connections. The organization forced the authorities back on the case and he was then sentenced to six years in a Kabul juvenile prison.

He has three years left in his sentence, and Hosnia's parents fear for their daughter's life.

So the shelter is her home now and the women and children here, her family.

"We will take care of her through adulthood," Naderi said.

Hosnia's father, a poor farmer, knows the only chance for his girl to have a future in a country where rape victims are punished, is if she grows up here.

This shelter has dozens of heart-wrenching stories; it also houses dozens of women and girls who have the courage to live in a country where one of the biggest dangers is to be a woman.

All About Afghanistan • War and Conflict • The Taliban