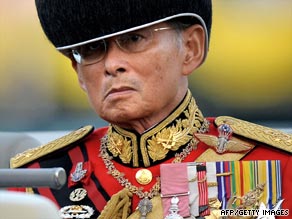 King Bhumibol Adulyadej attends a celebration of his 81st birthday in Bangkok on December 2, 2008.

King Bhumibol Adulyadej, 81, was admitted to a Bangkok hospital on Saturday night. Doctors are monitoring his condition while administering antibiotics and intravenous fluid, the statement from the Royal Household Bureau said.

The statement was carried by Thai News Agency and other local media.

Thailand abolished absolute monarchy in the 1930s, so the king wields little power although he last month appealed for unity amid Thailand's four-year-long political crisis. He remains a deeply revered figure and enjoys immense popularity.

"There is no problem with His Majesty's conditions. From my chats with doctors, there is nothing to be concerned about," Abhisit said after signing a visitors' log book at the hospital, according to Reuters.com.

All About Thailand • Monarchies • Bhumibol Adulyadej