(CNN) -- Afraid that her husband will leave her for a younger woman, a 107-year-old Malaysian woman is looking to marry again -- for the 23rd time. 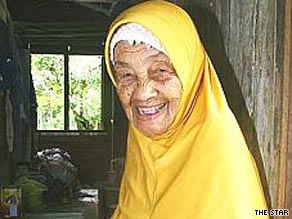 Wok Kundor: "I am an aged woman. I don't have the body nor am I a young woman who can attract anyone."

Wok Kundor has been happily married for four years to her husband, a man 70 years her junior.

But since he left their village in northern Terengganu state for a drug rehabilitation program in the capital, Kuala Lumpur, Wok has had a gnawing feeling.

"She said that she has been feeling insecure lately and she needs to find out whether he still loves her or not," said R.S.N. Murali, a reporter for The Star. The English-language Malaysian daily was among several local media outlets reporting on the lifelong romantic.

"She is worried he might not come back after his program and find himself a younger wife," Murali said.

If so, Wok has her eyes set on a 50-year-old man, but hopes it does not come to that.

"I realize that I am an aged woman. I don't have the body nor am I a young woman who can attract anyone," she told the newspaper.

"My intention to remarry is to fill my forlornness," particularly during the Muslim month of fasting, Ramadan, she said.

Malaysian media, which has previously reported on the woman, said Wok has been married 22 times. That would make her marriages last an average of four years.

Wok would not discuss past relationships, Murali said.

"Some of her better halves have passed away or have divorced, but she doesn't want to talk about them or her children," he said.

Wok and her current husband, Mohammed Boor Che Musa, hail from the same village and met there.

Muhammad, 37, was quoted in an earlier report as saying the couple fell for each other because it was "God's will."

On Monday, he told The Star that he is still very much in love with his wife and cannot dream of life with someone else.

But Wok wants to hear him say it, Murali said.

Soon, the centenarian plans to make the journey to Kuala Lumpur -- if she can find a neighbor to drive her there.