TOKYO, Japan (CNN) -- It's all but certain that Yukio Hatoyama will be elected Japan's next prime minister on Wednesday. 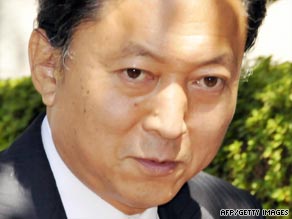 Yukio Hatoyama has criticized what he said was his predecessor's pro-United States stance.

Less clear is the direction the nation will take under him.

The country is still reeling from the after-effects of its worst recession since World War II. Unemployment is at historic highs, as is homelessness. Pessimism and impatience dominate the national mood.

Against that backdrop, Hatoyama faces delivering on a laundry list of promises. And voters, who handed his Democratic Party of Japan (DPJ) a landslide election win last month, are unlikely to give the party much time to make good.

Exit polls suggested the vote was less an endorsement of the party's ambitious plans than a rejection of the status quo -- namely the Liberal Democratic Party (LDP), which has governed the country for nearly half a century.

"People did not give a policy mandate to DPJ. They won because LDP self-destructed," said Yukio Okamoto, who served for two decades in Japan's foreign ministry before founding a consulting firm.

"So they have to prove to the electorate that they are a credible party policy-wise."

The DPJ also has little more than three months to revise and submit the national budget.

Hatoyama has pledged to raise the minimum wage and discourage hiring through agencies or on temporary contracts. On climate change, he has set an ambitious target of cutting greenhouse gas emissions by 25 percent within 10 years from its 1990 levels.

The party has adopted a salvation plan based on "trickle up economics." It wants to put money in the hands of families, in hopes that they will spend it in Japan and stimulate the world's second-largest economy.

Though Japan officially rebounded from its recession in mid-August, Japanese households have yet to feel secure about a lasting economic recovery.

In its election manifesto, the DPJ said it will pay about $3,000 per child to each family every year -- to encourage women to have babies and reverse the country's rapidly aging and shrinking population.

It also has pledged to pay about $1,000 a month to each unemployed Japanese as they looks for work.

But the question is, where will the money come from. Japan's budget deficit is enormous. Its national debt is almost twice its gross domestic product.

"The money which should go to the consumers and the farmers and small-scale business owners was stopped by the bureaucrats," DPJ lawmaker Yukihasa Fujita said after the party's victory last month.

But replacing decades of institutional expertise will be a tall order for a party with no experience governing at the national level.

On the foreign policy front, Hatoyama has strongly criticized what he perceived as his predecessor's pro-United States stance.

"We've said yes, yes, and sent our troops whenever the U.S. has asked us," he said after the election win. "We should take pride in our own position."

Hatoyama said he will halt Japan's refueling missions in the Indian Ocean in support of U.S.-led coalition warships in and around Afghanistan.

But analysts say Hatoyama is unlikely to risk alienation abroad while he focuses on fixing what ails Japan domestically.

A special parliamentary session will vote Wednesday to elect the new prime minister. Hatoyama's victory is assured: His party has 308 of the lower chamber's 480 seats.

Elections for the upper house will be held next year.

All About Japan • Taro Aso