Obama to add tariffs to some Chinese tire imports

WASHINGTON (CNN) -- President Obama will place tariffs on imports of some Chinese tires for three years in an effort to curb a surge in exports that has rocked the U.S. tire industry. 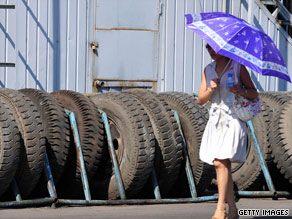 The White House announced plans to impose tariffs on some tires entering the United States from China.

The new tariffs will be on passenger car and light truck tires, the White House said in a statement Friday night.

"The president decided to remedy the clear disruption to the U.S. tire industry based on the facts and the law in this case," the statement said.

Chinese leaders have in the past expressed displeasure about a possible tire tariff.

"The case is neither supported by facts nor does it have valid legal grounds," he added.