KABUL, Afghanistan (CNN) -- A New York Times reporter who was kidnapped last week was freed Wednesday in a pre-dawn military raid in Afghanistan that left a British commando, an Afghan journalist and several others dead. 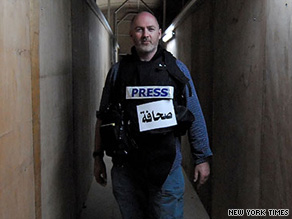 A British commando died in the operation, the country's Ministry of Defense said without offering further details.

Crossfire during the raid also killed a woman and a child, said Abdel Wahid Omar Khil, governor of Kunduz district, in Kunduz province, where the rescue took place.

Armed gunmen kidnapped the journalists Saturday while they were covering a NATO airstrike on Taliban forces the day before that killed at least 90 people in the northern Kunduz province.

Neither CNN nor the Times had reported Farrell's kidnapping for security reasons.

"We feared that media attention would raise the temperature and increase the risk to the captives," the paper quoted Executive Editor Bill Keller as saying Wednesday.

Farrell called the newspaper's foreign editor before dawn and said he was "extracted" in a commando raid after a fierce firefight, according to a report on the Times Web site.

"There were bullets all around us. I could hear British and Afghan voices," Farrell, a 46-year-old dual Irish-British citizen, told the paper.

Farrell and Munadi ran outside during the firefight. At the end of a wall, Munadi went forward, shouting: "Journalist! Journalist!" but dropped in a hail of bullets, Farrell said. He didn't know whether the shots came from allied or militant fire.

"I saw him go down in front of me. He did not move. He's dead," Farrell told the paper. "He was so close, he was just 2 feet in front of me when he dropped."

Farrell's citizenship played a role in the British decision to stage the rescue, said a spokesman for the Ministry of Defense.

Watch a former British commander on the difficulty in rescuing hostages »

"The obvious link for us is that Farrell is a British national. We want to safeguard the life of one of our citizens," the spokesman said, declining to discuss operational details of the rescue mission.

"We don't comment about the actions of British Special Ops forces."

Local Afghans provided information and helped the commandos locate where Farrell was being held, said another British official who was not authorized to speak publicly on the matter.

He said the judgment to proceed with such an operation "is always a difficult one, but we think it represented the best chance to save his life."

Brown offered condolences to the families of Munadi and the British commando. Of the commando, Brown said, "His bravery will not be forgotten."

The operation to rescue the hostages happened after extensive planning and consideration, Brown said.

"Those involved knew the high risks they were running. That they undertook it in such circumstances showed breathtaking heroism," Brown said. "Hostage-taking is never justified, and the U.K. does not make substantive concessions, including paying ransoms. But whenever British nationals are kidnapped, we and our allies will do everything in our power to free them."

David Rohde, a local reporter and a driver were kidnapped November 10 outside Kabul.

The two reporters escaped on June 19 by climbing over a wall in the compound where they were held for seven months in Pakistan's North Waziristan region. The driver did not escape, the newspaper said.

The death toll in the Kunduz airstrike, which Farrell was covering when he was kidnapped, has varied, depending on the source, but local Afghan officials have said at least half of those killed were civilians.

The NATO commander in the area called in the strike Friday as Afghans tried to siphon fuel from two tankers hijacked by the Taliban a day earlier.

The Taliban allowed villagers to drain the tankers carrying fuel earmarked for the NATO-led force after they became stuck in the mud when the militants tried to drive them through the Kunduz River.

The military thought there were no civilians near the trucks at the time of the attack, the ISAF's Capt. Elizabeth Mathias said.

Farrell, who joined The New York Times two years ago, also was briefly kidnapped in April 2004 in Falluja, Iraq. At the time, he was on assignment for The Times of London.

In a separate incident Wednesday, a suicide attack killed at least two civilians and injured several others, including NATO personnel, near the main British military base in southern Afghanistan, the ISAF said.

The suicide bomber detonated his explosives vest near a crowd of civilian truck drivers near the entrance of Camp Bastion in volatile Helmand province, the ISAF said.

The injured civilians and ISAF personnel were treated at Camp Bastion, which is in Washir District. The casualty count is unclear as an investigation continues.

CNN's Ingrid Formanek and Chris Lawrence contributed to this report.

All About Afghanistan • The Taliban • Gordon Brown