Chinese doctors say some claims of needle-stabbings are mistaken

URUMQI, China (CNN) -- Reports of alleged syringe stabbings in a restive western Chinese city are generating a bit of panic, but doctors say some people have incorrectly concluded they were attacked with needles. 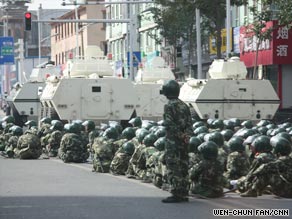 "In the patients we have seen in the last couple of days, there are many which we believe were not actually punctured with needles," Wang Hanbin, a Peoples' Liberation Army doctor examining people in Urumqi, told reporters on Saturday at a briefing.

Wang said about 20 cases are being investigated closely and samples were being taken to laboratories in Beijing for more testing. But, he said, "many of the patients we have seen were mainly influenced by psychological factors."

Wang, a member of a six-person military medical panel reviewing the syringe-stabbing claims, attributes the false reports to widespread fear and lack of medical knowledge.

"Many of the patients did not actually see their attacker or the act of others attacking them with needles. Some patients who had needle puncture wounds experienced some discomfort in the area of the wound, and showed some symptoms, but couldn't give an accurate account of what they perceived to have been a needle attack."

This is the latest crisis plaguing Xinjiang province and its capital city of Urumqi, where tensions have boiled over between Uyghurs and Han Chinese. The Han Chinese are the country's dominant ethnic group, and the Uyghurs are a Turkic-speaking Muslim minority who consider Xinjiang their homeland.

Ethnic Uyghurs have been blamed for the alleged syringe stabbings, and demonstrators clashed with police in Urumqi for two days this week over the issue. Protesters were demanding better police protection and a crackdown on the Uyghurs.

The latest unrest left five people dead and 14 injured, according to Urumqi's deputy mayor, and the Communist party chief in the city has been dismissed from his job amid the crisis, according to state-run media reported.

Watch report on unrest in Urumqi from CNN's John Vause »

At the press conference held by military medical personnel, the doctors said puncture wounds could not be found "in a large percentage of the patients."

"Some could have been bitten by insects such as mosquitoes, and in other cases there were moles, or skin pigmentation, and we couldn't find a needle puncture wound," said Wang, speaking at the news conference.

Wang urged people not to panic and urged them to immediately seek medical treatment if they think they were stabbed. He also said people need to educate themselves about medical care.

Rumors have abounded in Urumqi of recent syringe stabbers trying to spread AIDS and other diseases. But another doctor, Duan Qing, explained at the briefing that would be impossible for there to be any such cases of AIDS, Hepatitis B, Hepatitis C, or syphilis because there is a lengthy incubation period.

"Even if there are cases of such illnesses, they are unrelated to incidents. This is basic medical knowledge," she said.

The three incidents that led to the arrests occurred in late August.

A man admitted stabbing a female shopper with a pin on August 28.

Authorities said a man and woman on August 29 stole money from a taxi driver after threatening him with a syringe.

And in the third incident, a man resisting arrest stabbed a police officer with a syringe on August 31.