(CNN) -- North Korea's state-run news agency said Thursday that the country has sent a letter to the United Nations announcing that "reprocessing of spent fuel rods is at its final phase and extracted plutonium is being weaponized." 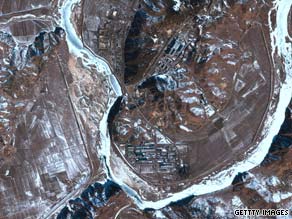 North Korea can also now enter the final stage of uranium enrichment, it said in the letter to the president of the U.N. Security Council, according to state-run KCNA.

Despite stating in the letter that they "totally reject" a Security Council resolution in June that demanded that the country no longer pursue nuclear weapons, the North Koreans said they are "prepared for both dialogue and sanctions," KCNA reported.

The government also warned, "If some permanent members of the UNSC wish to put sanctions first before dialogue, we would respond with bolstering our nuclear deterrence first before we meet them in a dialogue," according to KCNA.

The news comes on the heels of the Obama administration's latest attempt to restart stalled nuclear negotiations with the reclusive state.

In the coming days, U.S. envoy Stephen Bosworth and the director of the State Department's Office of Korean Affairs, Sung Kim, will meet with officials representing China, Japan, South Korea and Russia -- all countries partnering with the United States in talks aimed at ending North Korea's nuclear program.

North Korea quit the talks in April after the U.N. Security Council censured Pyongyang for a long-range rocket test that month.

In the letter Thursday, Pyongyang stated that it "never objected to the denuclearization of the Korean Peninsula and of the world itself. What we objected to is the structure of the six way talks which had been used to violate outrageously the DPRK's sovereignty and its right to peaceful development."

Tensions had eased somewhat in recent weeks on the Korean peninsula, giving hope to the resumption of nuclear talks with the North.

In August, North and South Korea agreed to resume cross-border tourism, ease border controls and facilitate cross-border family reunions, signaling a warming in relations that had been tense for most of the year.

Cross-border traffic between North and South Korea returned to normal Tuesday, after eight months of restrictions by the North.

Recent meetings between Korean officials are in stark contrast to the tense public statements the nations made about each other earlier this year.

The two Koreas have officially remained in conflict since the conclusion of the Korean War in 1953, which ended in a truce, but no formal peace treaty was signed.