August is deadliest month for U.S. military in Afghanistan

KABUL, Afghanistan (CNN) -- August has become the deadliest month for the U.S. military in Afghanistan since the U.S. invasion after the attacks of September 11, 2001. 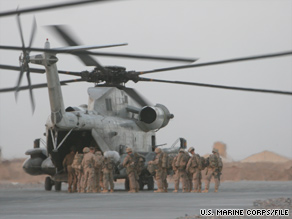 U.S. Marines, with Afghan soldiers and police, board a helicopter at Forward Operating Base Dwyer, Afghanistan.

An American service member died in a roadside bombing in eastern Afghanistan on Friday, bringing the number of U.S. military deaths in the war-ravaged country in August to 46, according to a CNN count of military figures.

That's the highest monthly toll of the nearly eight-year-long conflict, surpassing the previous high of 45 in July.

President Obama has called the mission in Afghanistan a "war of necessity" and has placed a great emphasis on defeating the Taliban and al Qaeda militants operating there and in Pakistan.

U.S., British and other international forces under the NATO umbrella in Afghanistan bolstered their presence this year to improve security for last week's presidential and provincial elections.

Senior U.S. military officials said the latest military assessment shows that the Taliban exert "considerable influence" over a third of the country, and Adm. Michael Mullen, chairman of the U.S. Joint Chiefs of Staff, said recently that the situation in Afghanistan is "serious and deteriorating"

There have been indications that Obama soon could be asked to commit more American troops.

Gen. Stanley McChrystal, the top U.S. commander in Afghanistan, has been assessing the progress of Obama's mission there. The general is expected to present his review in the coming weeks, and a senior U.S. military official said last month that McChrystal was expected to request even more U.S. troops.

Members of a congressional delegation who met with him said there's no doubt he will ask for more troops.

The Pentagon, however, has said McChrystal has not yet decided whether to ask for more troops. And Defense Secretary Robert Gates has signaled that he would like to gauge the impact of the additional 6,000 troops before considering whether to send more.

Asked if the president is concerned there might not be enough troops on the ground, White House spokesman Bill Burton has said that Obama laid out a "winning strategy" earlier this year and that the administration would wait for McChrystal's assessment and "make a decision accordingly."

As for the Afghan presidential elections, Afghan President Hamid Karzai leads his rivals, according to the latest partial election results issued this week.

Karzai has 422,137 votes, compared with 330,711 for his nearest challenger, his former foreign minister, Abdullah Abdullah. Ramazan Bashardost is a distant third, with 108,156 votes.

Only 17.2 percent of the ballots from the August 20 election have been counted, the Independent Election Commission said. Final results are not expected until September.