(CNN) -- The American man who swam to Aung San Suu Kyi's home in Myanmar said Thursday he still believes he did the right thing, even though his visit led to an extension of the pro-democracy leader's house arrest. 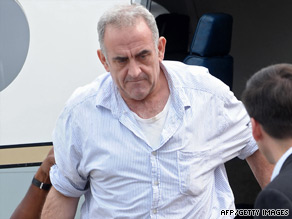 John Yettaw told Aung San Suu Kyi he had a vision she would be murdered.

John Yettaw, 53, swam across a lake to Suu Kyi's home in May and stayed for two days before authorities arrested him along with Suu Kyi and two of her staff.

His presence violated the terms of Suu Kyi's house arrest -- which was about to expire -- leading a judge to extend it by another 18 months.

But Yettaw said he made the trip to Yangon to save Suu Kyi from assassination, and that it was successful. What critics have described as a "stunt" brought enough attention to her plight, he said, to ensure that Suu Kyi could not be killed by the country's ruling military junta.

Yettaw said on CNN's "American Morning" that he is "grateful that she's alive, grateful that the entire world is watching and there's no way these generals are ever going to try to assassinate her."

To many, however, his visit did more harm than good. Some thought he might be mentally ill to attempt what he did -- an idea he rejects, though he says he can understand why people believe it.

But Yettaw said he had no idea that Suu Kyi would be arrested and put on trial for something that he would do.

"I wept every day and I've suffered every day" because of the punishment she received, he told CNN. He called her sentence "heartbreaking."

The case of Suu Kyi, a Nobel Peace Prize laureate who has been the symbol of the country's opposition for two decades, first came to Yettaw's attention when he was in Thailand and saw her photograph.

"I instantly had a premonition, or a vision, that I saw myself going through a lake and over a fence and was at a back door of a house," he told CNN. "Then (I) Googled from there and realized she lived next to Inya Lake and I got a visa to get into Yangon. And I thought, since this has been presented to me, I'm going to make this happen."

The retired bus driver and Vietnam veteran from Missouri told his wife only that he had a premonition he would become a political prisoner in Myanmar. She told her husband not to go, but he went anyway.

In November 2008, Yettaw said, he managed to swim across the lake and leave scriptures from the Book of Mormon for Suu Kyi. But later he had a vision that Suu Kyi would be assassinated, so he decided to make another trip.

That was the fateful trip on May 3.

"The second time that I came was the same route, in through the sewer tunnel and into the water," he said. "But this time of year the water level was much lower and I had two bags filled with a lot of stuff, and so I had to military-crawl with these two bags and I got caught. Two soldiers spotted me.

"Fortunately, by the time they got close to me, I rolled over into the water with my bags which were tied together, and I literally was walking through the water and they were frightened. They, I don't think, saw me -- they saw this bag floating through the water and moving at a consistent rate, so they started throwing rocks at it. And inside I prayed, 'What do I do?' and the only response that I felt, inspiration, was 'keep walking.' And that's what I did."

Yettaw managed to reach Suu Kyi's house and was able to explain that he had a vision she would be murdered. He said Suu Kyi didn't think he was crazy, and she was "absolutely" happy to see him.

Yettaw was arrested and convicted of violating immigration laws, municipal laws, and the conditions of Suu Kyi's house arrest. He was sentenced to seven years of hard labor, though he was freed this month after U.S. Sen. Jim Webb traveled to Myanmar and intervened in his case.

After his arrest, Yettaw said, he spent two and a half weeks under armed guard and was subject to interrogation at any hour of the day or night.

Suu Kyi was initially sentenced to three years in prison after a military court found her guilty of violating her house arrest, but the head of the junta later commuted it to 18 months of home confinement.

Suu Kyi's two housekeepers, who are her sole companions in her heavily guarded residence, also were sentenced to 18 months of house arrest to be served alongside Suu Kyi.

The opposition leader told the court she didn't know Yettaw, was unaware of his plans to visit, and didn't report his intrusion because she didn't want him to get in trouble.

Yettaw insists he saved Suu Kyi's life. He said the ordeal has made him value the rights people have in the United States.

"I'm so grateful we live in a country where we have freedom of speech, and over there (in Myanmar), where they speak the truth, they're killed and imprisoned," Yettaw told CNN. "I want you to know that even on our worst day ... the United States is one of the greatest nations in the world."

Suu Kyi was put under house arrest in 1989. The following year, her National League for Democracy party won more than 80 percent of the legislative seats in the first free elections in the country in nearly 30 years.

The military junta disqualified Suu Kyi from serving because of her house arrest, annulled the election results and refused to step down.

The government has said next year's scheduled elections will reintroduce democracy in Myanmar. But its rules forbids citizens who bore children with foreigners from running for office. That makes Suu Kyi ineligible because she married a British man and has two sons with him.