ISLAMABAD, Pakistan (CNN) -- In Pakistan's combustible Swat Valley, some girls refuse to wear uniforms so they can make it to school without being harmed. 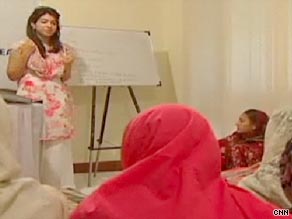 Other girls hide textbooks in their shawls to escape harassment.

School-age girls are among the victims in the fierce fighting between government soldiers and Taliban militants in the Swat Valley. The Pakistani government said it has flushed much of the Taliban out of the area, but some fighting persists.

Many girls remain banned from schools. Dozens of their schools have been bombed, and militants have burned books.

A new program has taken 26 girls out of the battle-scarred region to Islamabad for a 10-day retreat, where they can learn in safer surroundings.

A group of college students of Pakistani background is helping the girls. Among them are Shiza Shahid, 20, from California's Stanford University, who organized the program called Shajar-e-llm, or Tree of Knowledge.

Shahid said she was moved to help after hearing about how the girls struggled to get an education.

"I think we were so angry, upset and emotional that we decided we have to do something," she said.

"We need support. We need unfortunately more organization, more of the bureaucratic nitty-gritty that you don't want to do, but you have to," Shahid said. "We are young, and that does come with the burden as not being equally trusted or seen as capable."

Nonetheless, the group has ambitions for a boys' learning retreat as well.

The lessons are simple enough -- confidence-building exercises, critical-thinking lessons -- all framed in the context of Islamic values.

The girls -- ages 11 to 14 -- spoke about their dreams. One wants to meet a poet; another wants to learn calligraphy. Another wants to grow up to lead Pakistan.

"I want to become president and rule this country in a good way," said 12-year-old Malila.

One day during the retreat, the girls were taught a song about freedom of speech. As a guitarist strummed, the girls sang that God gives everyone the right to free speech and no one can take it away.

Free speech seemed to end with the song, however. The girls could not risk talking about Taliban harassment, because the militants' version of Islamic law lingers. Such Islamic law, or shariah, also keeps females from going to school or going outside without their husbands.

The United Nations estimates that 375,000 Swat Valley residents fled their homes during fighting that started in April. In all, 2.5 million Pakistanis were displaced in what was said to be one of the largest human migrations in recent history.

Many residents have returned to their homes, but peace has not been completely restored to the region.

And soon, the girls at the learning retreat will return home to the Swat Valley as well.

Organizers said they hope the girls will carry a new love for education.

"There were tears and there were tough moments," said Madihah Akhter, a volunteer with the program. "But the girls surprised me. They were really resilient. They were beyond their years."