NEW DELHI, India (CNN) -- Naked, bound and blindfolded, a crudely shot video shows a man being pushed to the ground by men wearing what appear to be military, camouflage fatigues. 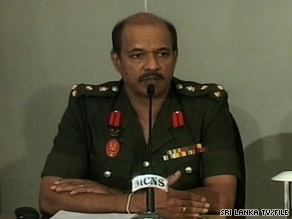 One of the men kicks the blindfolded man in the back. Another man raises a gun, points it at the back of the man's head and pulls the trigger.

A loud crack is heard; the man slumps to the ground.

Off-camera, someone can be heard saying in Sinhala, the majority language of Sri Lanka, "I think he looked back."

The execution-style shooting is repeated with a second man, also bound and naked. Off-camera, a voice can be heard saying, "This is like hitting midgets."

All the while someone is recording the scene, apparently with a cellphone camera. Panning across the open field, the camera reveals nine bodies, some lying in pools of blood. From the video alone, it's impossible to tell who they were or who killed them.

The video was obtained by Journalists for Democracy in Sri Lanka, an advocacy group based in Berlin, Germany, that accuses the Sri Lankan government of harassing and intimidating journalists.

CNN could not independently verify the authenticity of the video nor could it determine when or where it was shot, but sources in Sri Lanka told CNN they believe it was shot in January as the army closed in on the remnants of the Tigers.

Journalists for Democracy says it is evidence of atrocities committed during the final months of the 26-year conflict that became infamous for its merciless killing: the jungle warfare between the Sri Lankan army and the Tamil Tiger rebels.

Each side has accused the other of atrocities, though evidence surfaced to support the claims has surfaced only rarely.

A Sri Lankan official said the video proves nothing.

Watch footage from the video »

"Sri Lankan soldiers never get involved in this kind of a situation," Brigadier Udaya Nanayakkara told CNN. "We are 100 percent sure it has nothing to do with Sri Lankan soldiers; it is all created and staged."

Asked if he was saying the video was faked, he answered, "This is all fake ... I feel it's not an actual situation, it's a created one."

The Sri Lankan High Commission (Embassy) in London issued a statement to CNN affiliate Channel 4 News, which first aired the video, saying that, "in many instances in the past, various media institutions used doctored videos, photographs and documents to defame the Sri Lankan government and armed forces."

But Journalists for Democracy -- which would divulge neither how it obtained the video nor from where -- said the the men carrying out the executions are wearing Sri Lankan military uniforms.

Independent observers were largely excluded from the conflict zone during the war in Sri Lanka. Even today access remains tightly restricted.

Not everyone is buying the government's assertion that it was not involved in the killings.

"The Sri Lankan government has had a pattern of lying during this conflict," said Yolanda Foster, Amnesty International's Sri Lankan expert.

While the video's authenticity cannot be independently verified, the organization has received reports from survivors of the conflict that suggest war crimes were committed, she said.

"Given the restrictions given on the media, the fact that the government is not allowing people to freely interview the displaced who may be able to share accounts of what happened in the final months of the war, it is urgent that there is an independent investigation," Foster said.

That appears unlikely to occur any time soon. The government routinely rejects calls by human rights groups for independent investigations into its campaign against the Tigers.

But Nanayakkara told CNN the government will try to find out who is trying to discredit the Sri Lankan government by releasing what it called a faked video.

"This is to tarnish the image of Sri Lanka," he said.

All About Liberation Tigers of Tamil Eelam • Sri Lanka