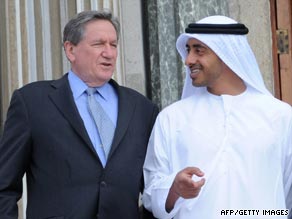 Such money even outpaces the cash gathered from Afghanistan's multibillion-dollar exports of opium and heroin, said Richard Holbrooke, the United States' special envoy for Afghanistan and Pakistan, in an interview Tuesday with CNN.

"It seems to be more from individuals carrying money in their suitcases," Holbrooke said. "Sometimes they are taking advantage of the pilgrimage [to the Muslim holy cities of Mecca and Medina in Saudi Arabia]. Sometimes from hawala [an informal international system for money transfers]. Sometimes from charities.

"It is an important part of the war. ... The Taliban is not a high-tech expensive organization."

In the story highlights section of an earlier version of this report, CNN.com mischaracterized comments made by U.S. special envoy Richard Holbrooke. We regret the error.

U.S. and NATO troops in Afghanistan have suffered high losses this summer at the hands of Taliban insurgents.

Holbrooke gave the interview to CNN on the sidelines of a Friends of Democratic Pakistan meeting in Istanbul. The meeting was attended by delegations from more than a dozen countries and international organizations, including the foreign ministers of Pakistan, Turkey, Sweden, Canada, the United Arab Emirates and Iran.

Members of the American and Iranian delegations walked past each other in the ornate marble halls of the 19th century Ottoman palace on the banks of the Bosporus Strait where the meeting took place, but did not interact openly in the picturesque venue.

Holbrooke missed a group photo attended by Iranian Foreign Minister Manouchehr Mottaki, one aide said, due to a problem of miscommunication. And Holbrooke said that, due to a bilateral meeting with another delegation, he was not in the conference room when the Iranian diplomat delivered remarks. He insisted he was not deliberately avoiding his Iranian counterpart.

"I saw them, they were in the room," Holbrooke said. "The Iranian made generally positive statements ... about supporting a democratic Pakistan."

Diplomats said much of Tuesday's meeting focused on rebuilding parts of northwestern Pakistan damaged when another round of fighting broke out between Taliban insurgents and the Pakistani military last spring. The conflict forced more than a million Pakistanis to flee their homes.

Holbrooke said one of the top priorities of the Obama administration in the region has been to help Afghanistan hold presidential elections, which took place on August 20.

That election was marred by Taliban violence, which claimed the lives of at least 26 people on election day. Opposition candidates have accused the government of incumbent president Hamid Karzai of fraud and the stuffing of ballot boxes, charges Karzai officials deny.

"That's politics, Afghan-style," Holbrooke told CNN. "That happens in Western democracies as well. We have charges repeatedly in American elections by candidates that the other side is not allowing [would-be voters] to register. We should not be surprised that democracy is imperfect even in Western countries. And Afghanistan has had unique difficulties in holding this election. So let's see what happens."

Holbrooke is urging observers to wait for the results of an investigation by Afghanistan's Electoral Complaints Commission.

All About Richard Holbrooke • The Taliban • Afghanistan • Pakistan