(CNN) -- A Malaysian model, who was set to become the first woman to be caned in the southeast Asian country for drinking beer in public, had her sentence postponed Monday until the end of the Islamic holy month of Ramadan. 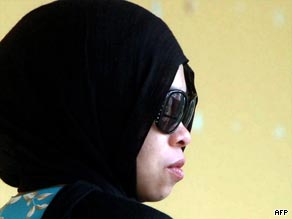 Kartika Sari Dewi Shukarno's punishment is unique in that she has opted to go through with it.

Authorities had picked up Kartika Sari Dewi Shukarno, 32, from her father's house Monday morning and were taking her to a prison in the eastern state of Pahang when the van turned around and brought her back.

"They sent her back to the house. They said the top official asked them not to bring her to Kuala Lumpur," said Kartika's father, Shukarno Abdul Muttalib.

Authorities in Pahang said the delay would run until the month of fasting ends. Monday was the third day of Ramadan.

An Islamic, or sharia, court in Pahang had fined Kartika -- a Muslim -- $1,400 (5,000 Malaysian ringgit) and sentenced her to six strokes with a rattan cane for drinking at a hotel bar two years ago.

Kartika, a 32-year-old part-time model and mother of two, was visiting Malaysia from Singapore at the time.

She pleaded guilty, paid the fine, and wanted her caning to be carried out in public.

She said she lost her job as a nurse in Singapore and took up part-time modeling to support her husband in raising their two children. Her son has cerebral palsy; her daughter a heart condition.

"I want to move on. This case has been hanging over me for a long time," she told CNN last week.

On Monday morning, Kartika hugged her children, bade a tearful goodbye to the throngs of people gathered at her father's house, and boarded the van.

She was to be taken to a prison on the outskirts of Kuala Lumpur. The caning would have been carried out within seven days of that, making her the first woman to be caned in Malaysia under sharia law.

Kartika's punishment is unique in that she has opted to go through with it. Two other Malaysians sentenced to the same fate have filed appeals, the Syariah (Sharia) Lawyers' Association of Malaysia said.

The case drew widespread attention and condemnation, in and outside Malaysia.

The moderate Muslim country has a dual-track justice system, in which Islamic courts operate alongside civil courts.

Muslims -- who make up about 60 percent of the 28 million who populate the country -- are forbidden from consuming alcohol. Other religious groups are exempt.

Though caning is used as a supplementary punishment in Malaysia for at least 40 crimes, such as rape or immigration violations, it is not meted out by Malaysia's civil court for alcohol consumption.

In this respect, Kartika would have been the first woman to be caned for violating the country's religious laws.

"Regardless of whether or not such penalties fall under Syariah law or civil law, we believe that these should be repealed, as they go against the fundamental human right to be free from torture and violence," said Haslinah Yaacob, vice president for the All Women's Action Society.

All About Islam • Malaysia