BEIJING, China (CNN) -- China is shutting down a pair of smelting plants suspected of sickening several thousand children with lead poisoning, according to state-run media. 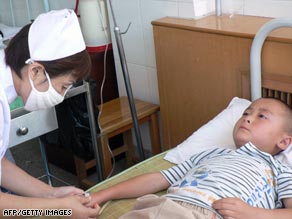 A Chinese boy gets treated for blood poisoning in Shaanxi province Aug. 15.

At least 851 children living near a plant in northwestern China's Shaanxi province were found to have excessive lead levels in their blood, according to the Xinhua news agency.

County officials had agreed to relocate residents who live within 1,640 feet (500 meters) of the Dongling Lead and Zinc Smelting Co. in three years, but the relocation is behind schedule, Sun Hong, the company's general manager, told Xinhua.

The local government has pledged to speed up the relocation, Xinhua reported this month.

A second smelter also was closed Wednesday in central China and two of its executives detained, a local official said, according to Xinhua,

Initial tests showed more than 1,300 children in the Hunan province town of Wenping have excessive lead in their blood from the Wugang Manganese Smelting Plant. A second round of testing has been ordered to confirm the results.

The plant opened in May 2008 without gaining the approval of the local environment protection bureau, said Huang Wenbin, a deputy environment chief in Wugang City, Xinhua reported. The plant was within 500 meters (about a quarter mile) of three schools.

The poisonings have occurred against the backdrop of China's rapid industrialization, which has produced economic success and wrought environmental havoc. Hundreds of millions of Chinese lack access to uncontaminated drinking water, and air pollution is blamed for myriad deaths and illnesses every year. Toxic air enshrouds cities across the country, one of the most polluted in the world.

The government has stepped up anti-pollution efforts in recent years, but many companies flout such campaigns and laws.