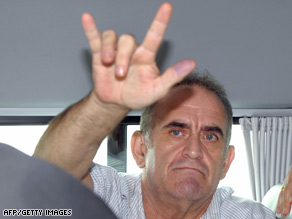 John Yettaw is shown this past weekend sitting inside a van at a military airport in Bangkok, Thailand.

Although the Thai Foreign Ministry and immigration police confirmed his exit from Bangkok, his destination was not immediately known.

Yettaw, a diabetic, had arrived to Thailand from Myanmar on Sunday aboard a military plane and then taken to a hospital for observation.

Yettaw, a 53-year-old former military serviceman from Falcon, Missouri, was sentenced last week for a May 3 incident when he swam, uninvited, to the house of Suu Kyi and stayed for two days.

"He was not a well man," Webb said without elaborating about Yettaw. "He had a medical emergency this morning when they read him his orders of deportation."

Webb, who chairs the East Asia and Pacific affairs subcommittee of the Senate Foreign Relations Committee, was the first member of Congress to visit Myanmar in more than a decade. He also was the first U.S. official to meet with Than Shwe.

Yettaw's presence at Suu Kyi's compound violated the terms of the house arrest she was under at the time, Myanmar's government said. A military court found her guilty last week and commuted her three-year prison sentence to 18 more months of house arrest.

Her two house companions, who are members of Suu Kyi's National League for Democracy, received the same sentence.

Yettaw was sentenced to seven years of hard labor. He was convicted of violating immigration laws, municipal laws and the house arrest terms.

Under the order from Than Shwe, Suu Kyi will be allowed to meet with government-approved guests and have access to television and newspapers. She will not be allowed to leave the home, however. It was unclear where the home would be.

In his meeting with the junta leader, Webb said he requested her release. "I raised the issue. I am hopeful that in the months moving forward, they will take a look at it," Webb told reporters in Bangkok.

That "would be a major step forward in resolving this situation," he added.

ASEAN has been reluctant in the past to address Suu Kyi's detention in Myanmar, one of its 10 member nations. But it has been under increased pressure to suspend Myanmar after Suu Kyi's conviction last week.

The Virginia Democrat said he will share his observations with U.S. President Barack Obama's administration, which has said it will review the current U.S. policy toward Myanmar.

The senator's intercession for Yettaw did not sit well with some exile groups.

The military junta, which has ruled Myanmar since 1962, changed the English translation of the country's name from Burma in 1989, but Suu Kyi's supporters and several governments still use the older name.

In the trial, Suu Kyi's lawyers tried to turn the case on its head by arguing that the government had failed to protect her.

Suu Kyi, who won the Nobel Peace Prize in 1991, said she didn't know Yettaw or his plans and denied she had any wrongdoing.