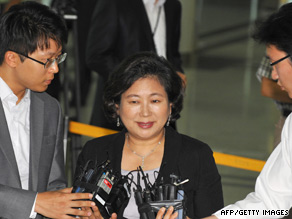 Hyun stayed in Pyongyang longer than planned, as she waited for a meeting with Kim, who according to North Korean media had been out of town.

North Korea's state-run news agency KCNA said Kim met with the chairwoman "and her party on a visit to Pyongyang at the invitation of the Korea Asia-Pacific Peace Committee."

Officials also agreed to resume tourism of the historic border city of Kaesong and "energize the operation" of the jointly run industrial complex there, KCNA said.

"Both sides expressed will to improve the north-south relations," KCNA reported.

Kim has met with the Hyundai chief twice before in recent years, Yonhap reported.

The employee, Yu Seong-jin, was accused of "slandering the North's political system," Yonhap reported, noting that he was released days after North Korea freed two U.S. journalists after a meeting between Kim and former U.S. President Bill Clinton.