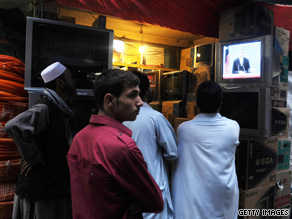 Afghans watch a live televised election debate in a street in Kabul on Sunday.

Thursday's vote marks only the second presidential election in Afghanistan's history, and is seen as a test of efforts by the United States and Europe to bring stability to the country.

Karzai is the front-runner in the election, with a recent poll conducted by the Washington-based International Republican Institute showing him holding a commanding lead over his two closest rivals, former finance minister Ashraf Ghani and former foreign minister Abdullah Abdullah.

Karzai and Ghani joined in the two-hour debate Sunday, which was aired on the state broadcaster Radio and Television Afghanistan, as did another candidate, former minister of planning Ramazan Bashardost. But Abdullah Abdullah dropped out of the debate, according to the network.

While the rules did not allow the candidates to speak directly to each other -- questions were posed by a moderator -- that did not stop Ghani and Bashardost from heaping criticism on Karzai and his government for alleged corruption and for not doing enough to stop the growing violence that has engulfed the country.

Violence has increased as the Afghan government and the American-lead military coalition attempt to prevent the Taliban from making further inroads.

Karzai admitted that corruption was a problem in the country but offered no specifics as to what he would do to combat the problem.

On the sensitive issue of Afghan civilian casualties at the hands of coalition forces, Karzai pledged to stop NATO from conducting military operations without the permission of the government.

"We are the owner of the house and the coalition forces are the guests," Karzai said.

Ghani argued that a national consensus on the issue of foreign troops in Afghanistan needed to be reached and that Karzai was not up to the job.

"Until we have an owner for this land and a president who has a clear and specific Afghan strategy, and who is able to convince the world that his strategy is better, more practical and produces results, all other efforts will be useless," Ghani said.

Karzai said if elected he would convene a grand council of Afghanistan's tribal leaders to resolve issues of national importance.