BANGKOK, Thailand (CNN) -- A Thai court on Tuesday rejected the extradition of a man dubbed the "Merchant of Death", whom the U.S. government accuses of selling millions of dollars in weapons to Colombian rebels. 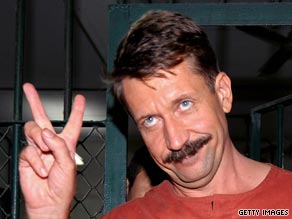 Viktor Bout gives the victory sign after a Thai court rejects the extradition request by the US.

In rejecting the extradition request, the court said the case of Viktor Bout was politically motivated. U.S. authorities have 72 hours to decide whether to appeal. In the absence of an appeal, Bout will walk out of jail a free man.

The United States "will be consulting with the Thai government about an appeal," U.S. Justice Department spokesman Dean Boyd said Tuesday.

"We're disappointed," Boyd said in a written statement. "We continue to believe that the facts of the case, relevant Thai law, and the terms of the bilateral extradition treaty clearly support the extradition of Viktor Bout to the United States to stand trial on serious terrorism charges."

Bout was arrested in Bangkok in March 2008 after a dramatic sting operation led by agents of the U.S. drug Enforcement Agency, posing as members of the Revolutionary Armed Forces of Colombia (FARC). Widely regarded as a prolific arms dealer, Bout, has been in Thai custody since.

He is accused of supplying weapons to war zones around the world -- from Sierra Leone to Afghanistan.

Bout has repeatedly said he has not broken any laws and the allegations against him are lies. Former U.S. Attorney General Michael Mukasey singled out Bout as a leading example of a new breed of organized crime leaders who operate across international boundaries to amass wealth without regard to political ideology.

It is widely believed that he inspired the character of Yuri Orlov, the arms dealer played by Nicholas Cage in the 2005 film "Lord of War."

CNN's Kocha Olarn and Dan Rivers in Bangkok, Thailand, contributed to this report.