DONGGUAN, China (CNN) -- Whenever Deng Huidong sees a little boy around 3 years of age, she can't help but wonder if he's her son. Her son, Ye Ruicong, was snatched by human traffickers more than a year ago when he was just 9 months old. 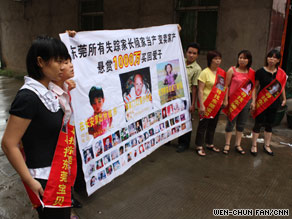 Parents outside the home of activist Deng Huidong in southeast China, hold banners with pictures of abducted children.

"I imagine how tall he would be, how fast he could run," Huidong said. "I take photos of boys who are about the same age to see; this way I can recognize him if we ever meet one day."

Huidong believes Ruicong was sold, possibly within hours, to a family without a son looking for a male heir.

Males come with a premium price tag in China. During a videotaped confession, a woman caught trafficking children two years ago told police that boys can sell for up to $1,200, girls for just more than $200.

Ruicong was gone in an instant. Recalling the abduction, Huidong said a white van slowly drove by while she was just outside her home with her daughter and son. The van stopped and reversed to the Deng household. The doors opened and a man leaned out and grabbed Ruicong. The van then sped off.

"It all happened within seconds; they didn't even get out of the car."

Watch how children are snatched »

Huidong gave chase on foot, screaming. A stranger on a motorcycle offered to help and together they chased the van until they reached a police car.

"I went in that damn police car but after a only a few seconds, they took a sudden turn down another road. I asked why but they just kept silent. I was crying and asking; they simply didn't reply. Later at the police station, I asked why and he told me he was off duty, so it was some one else's responsibility to catch the traffickers."

Despite repeated requests by CNN, the police involved refused to comment.

"We were really angry with the police," Huidong said. "Our son was snatched and they simply did nothing. It was like my lost son is less important than a dog."

Other parents whose children were lost have also complained of police indifference. Like Zhang Chunxiang, whose son went missing five years ago.

"Nobody helped us. The police did not think it was a big deal; it was November. It was not until December when they started to investigate."

Chen Fengyi's 4-year-old son was abducted while playing outside the family shop.

"The local police said our child had strayed by himself. Our entire family looked for him until dawn, I went back to the police station and knelt down to them but they didn't care, they kept saying 'the child went astray, look for him yourself.' The reason why they wouldn't open a case file was because there was no one who saw the abduction, nor was there video surveillance of the child being taken."

Police again declined to be interviewed.

But the man in charge of stopping human trafficking in China did agree to talk.

Watch his assessment of the problem »

Chen Shiqu, director of the Anti-Human Traffic Division of the Public Security Ministry, confirmed that in the past if there was no evidence a child had been abducted, then police did not have to open a case. But now the law has changed.

"Local police have been told to react as soon as they are alerted and these cases are now being treated as a criminal offense," Chen said. "There were cases (in the past) with no witnesses, or security video available, police officers would help look for the missing child and investigate but the case wasn't treated as a crime. But now they're all treated as crimes."

Chen would not comment on specific cases, only saying the claims by parents in this report were the exception.

"The few cases you mentioned will be solved according to procedure."

"They didn't say anything after they watched the video. They just copied it and said it was confidential. I thought they would try to find my kid with the video, but I never heard anything for two months. I asked the policemen and they said this case was confidential"

More than a year later, Lele remains missing, and his father says he is treated like a dissident.

"During sensitive times, like Children's Day, the government forces me to leave town ... they were afraid I would organize some activities like searching for kids. It's always like that."

Police in Lele's case did not respond to CNN's request for an interview.

Chen did not say how many children and how many women are annually trafficked in China, saying only the total for last year was 2, 256 -- roughly divided evenly between children and women.

He disputed -- without saying why -- the U.S. State Department estimate that between 10,000 and 20,000 women and children are trafficked each year in China; he disputes the view from the United Nations that anecdotal evidence suggests the official numbers are low.

"Police stations have recorded every case of kids missing and trafficked," Chen said, "so we don't think your data are valid."

In 2005 the Committee on the Rights of Children said the Chinese government numbers almost exclusively refer to the number of rescues, not the number of kidnappings.

Chen said police have launched regular nationwide crackdowns; rescued babies have been shown on state-run television. There's a new most-wanted list of the country's worst traffickers, he said, and 11 out of 20 have been arrested. Chen also cited something parents of missing children have been asking for: a new DNA database operating in parts of the country, matching rescued children with their parents.

"The appearance of children missing or stolen changes so that even their parents have difficulty in recognizing them," Chen said.

The parents of the stolen children also have complained that the law does not punish the buyers, providing the child is not mistreated. As long as that doesn't change, they say, there will always be a market with traffickers eager to do business.

As for Deng Huidong, the mother of Ruicong, she said thoughts of a family reunion are too painful.

"These days I just keep thinking that my boy is being taken care of by a kind-hearted family. I could give my son up as long as they really like him, and just tell me he is living a comfortable life."