ISLAMABAD, Pakistan (CNN) -- Zarghon Shah is a man who knows just how lucky he is to be alive. 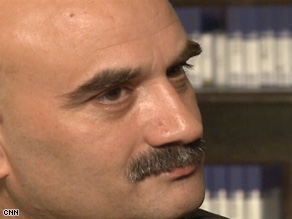 Zarghon Shah: "We were just counting our moments to death."

He came face-to-face with the feared Taliban fighters of Pakistan's Swat Valley, was ordered to be executed and gained a chilling insight into the mind of a fearsome militant who has waged a campaign of terror.

"I saw two Taliban standing there then I realized the danger, that we were in a wrong place," Zarghon said.

It was May this year when the TV reporter and his crew, reporting on the Taliban's uprising, strayed too far.

Zarghon, his cameraman and driver were captured in Buner, taken to an empty room and put on trial by a Taliban commander.

"He said you are telling lies; you are spies. It is because of you hell has been unleashed on us ... and it is you, the media, who is responsible for this war. I'm not going to spare you, I will slit your throat."

Then with a death sentence on his head, Zarghon and his crew were left alone for five hours -- an agonizing wait.

"We were just counting our moments to death." Zarghon told me.

And he knew it would be a most gruesome, horrible death.

He pictured his body, beheaded and hanging from Swat Valley's notorious "slaughter square" -- the town center of Mingora city, where the Taliban would display the bodies of their victims.

Zarghon said he just paced the floor unable to even look at his colleagues.

He wondered who would be first to be killed and he thought of the most precious thing in his life -- his daughter Noor.

It is now that Zarghon broke down in tears, remembering how he thought he would never see her again.

Zarghon's fate rested in the hands of a man known for his campaign of terror, Taliban leader Maulana Fazlullah. Fazlullah had captured the Swat Valley and moved his fighters into territory ever closer to Pakistan's capital, Islamabad.

Zarghon was handed a walkie-talkie. On the other end the very man who held Zarghon's life in his hand -- Fazlullah.

Zarghon's cameraman filmed the conversation all the while under the watch of a heavily armed Taliban fighter.

Fazlullah's voice was clearly heard: agitated and with a message of defiance to Pakistan's army.

"Our women and children have been displaced." He said. "There has been bloodshed. It is an insult to our nation. If they want to fight us then come to our mountains and see our strength and power."

The footage shows Zarghon clearly under pressure, gulping heavily, but with the presence of mind to question the Taliban leader. "What will end the fighting?" he asked.

Fazlullah demanded nothing less than the implementation of strict shariah or Islamic law. If not, the Taliban would fight to the death, he said.

"If the army has the ability to fight us: come to the mountains. The Taliban is in the mountains, we are committed to our cause. Nobody can defeat us," he said.

Yet the hardline Fazlullah did something that still puzzles Zarghon. He freed the TV crew, effectively commuting the execution order -- but there was a catch.

The Taliban instructed them to film destruction they say was caused by the Pakistan army.

On the footage you can hear gunfire and mortar rounds. Taliban fighters are clearly visible. Zarghon reports to camera, taking shelter behind a building.

The footage was meant to be propaganda for the Taliban. Not long after it was shot, Pakistan's army launched an offensive driving the Taliban from their stronghold.

Fazlullah escaped. Despite rumors he was wounded he continues to command his troops from the mountains.

For Zarghon, doing the Taliban's bidding was the price of freedom. It saved his life and gave him back to his wife, son and daughter.

"The most beautiful gift of my life was this, when I returned home and I saw my family, my wife and children again," he said before retreating into a silence and remembering the moment when he faced death and survived.