ISLAMABAD, Pakistan (CNN) -- Shazia knows what she sees when she looks in the mirror: a woman, feminine, delicate, attracted to beauty. But when others look at Shazia they see something else: a misfit. 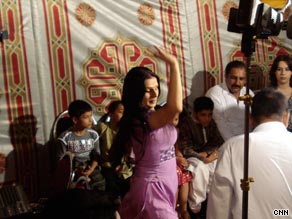 Shazia dances for the cameras at a party.

"People start staring at me in such a manner as if an animal from the jungle has come into the city." Shazia says.

Shazia belongs to Pakistan's community of eunuchs. It is a term here that loosely refers to transsexuals, transvestites or hermaphrodites, like Shazia, who are born with both male and female sex organs.

For Shazia what nature created, has made a life of hell.

"I do not want to accept this life. Had it been legal to commit suicide I would have done it."

When she was a child, Shazia said she had no doubt that she felt more a girl than a boy.

"When I used to go to school there used to be benches for boys on one side and girls on the other; my teacher always made me sit with the girls." she said.

Shazia left home when she was in her early teens. She said it was to save her family embarrassment and shame.

Like other eunuchs in Pakistan, she has lived in colonies. They are often shunned by their families and forced to make a living by begging or as prostitutes.

The colonies can be brutal places, where young people are often beaten and exploited.

When Shazia was 17, she says she was drugged and the head of the colony performed brutal surgery severing Shazia's penis.

But Shazia has survived the taunts, the humiliation and the savagery; now she is fighting back.

Shazia has formed an action group and is campaigning for eunuchs like her to get proper recognition.

Right now her state identity card lists her as a male. She wants to be counted as a whole person.

Dr. Khaki presented a petition to the Supreme Court, leading to the first register of eunuchs in Pakistan.

The court has ordered Pakistan's government departments to carry out a survey and recommend measures to fully integrate eunuchs into society without prejudice.

In earlier centuries eunuchs were seen as having the power to bring good luck. For Shazia and others, their luck may finally be changing.