SWAT VALLEY, Pakistan (CNN) -- The boys shuffle into the room in a remote army base high in the mountains of Pakistan's Swat Valley. They are disheveled, disoriented. 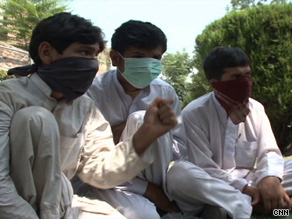 These boys say they were kidnapped by the Taliban and trained to be suicide bombers.

There are no smiles, their eyes stare at the floor. These are the lost souls of Pakistan's battle with the Taliban.

Each has a story of terror to tell, but the trauma runs so deep they can't even begin to properly find the words to describe what they have been through.

That task is best left to the psychiatrist who, with her team, was brought in to try to pick through the pieces of this nightmare; to make sense of the brutality here and try to put broken lives back together.

Dr. Fareeha Peracha describes these boys variously as "psychotic," "depressed," and in some cases, "psychopathic."

"They have been brainwashed. Brainwashed against people like you and me," she said.

CNN was given limited access to about a dozen boys.

They had all been kidnapped by the Taliban and taken to camps where they would be trained to kill; trained to be suicide bombers.

Watch Grant's exclusive interview with a wanted a Taliban leader »

CNN cannot reveal the boys' names; they have handkerchiefs tied across their faces to conceal their identities. The army fears they could face retribution should they be returned to their homes and families.

The boys sit in a circle as I try to get them to open up about their ordeal. What happened? Were they brutalized? What did the Taliban ask them to do?

So many questions. They answer hesitatingly, their voices barely a whisper.

"The first day they beat us and then made us exercise," one boy said. "They made us run and told us you will wage jihad."

They said the Taliban especially poisoned their minds against the Pakistan army.

They all say they were kidnapped by the Taliban, some snatched from fields and others from the towns they lived in.

"I was coming from the shop to my house, I had some stuff with me. They said, 'put your stuff in the car.' I helped them put stuff in the car. They asked if they should drop me in my village, but when we reached the village they blindfolded me and put a hand over my mouth," one boy said.

The Taliban's tactics seem to have worked.

I asked the psychiatrist, Dr. Fareeha, if she believes the boys are capable of killing.

"Oh yes," she said. "Two of them would not even give it a thought."

The army freed the boys during fierce fighting with the Taliban. Now they are hoping to rehabilitate the boys and one day return them home.

But Fareeha thinks that is a long way off -- if ever. She told army chiefs the boys are unpredictable.

One boy, she said, told her if he had a suicide bomber's jacket he would use it, that if he had a Kalashnikov, he would shoot.

Of course, it is impossible to verify all of the accounts of the boys, but the doctors have no doubt about their trauma.

Fareeha told Army chiefs that these boys were just a tip of the iceberg. After talking to the boys, she believes there are possibly hundreds of others just like them.

These boys are the victims of the Taliban's uprising here.

All they are left with are the terrible memories, the voices in their heads: the voices of the Taliban telling them to kill, they said.