China has more than 13 million abortions a year

BEIJING, China (CNN) -- The number of abortions performed in China each year tops 13 million, with inadequate knowledge of contraception playing a major role in the annual tally, state-run media reported. 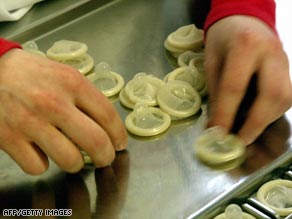 Chinese officials say more use of contraception could help prevent the large number of abortions.

Research from the National Population and Family Planning Commission's technology research center shows nearly half of the women who had abortions had not used any form of contraception, Wu Shangchun, a division director, told the newspaper.

"The challenge of reducing [the number] of women seeking abortions in China is tough," Wu said, according to China Daily.

China has a strict one-child policy, which the government has used to control its population growth. Abortion is legal in China and is widely used as a birth-control method.

The story in state-run media is a rare look into the numbers behind the nation's family planning policy.

The United States with a population roughly a quarter that of China reported less than a 10th of the number of abortions -- 820,151 -- in 2005, the most recent year figures were available from the Centers for Disease Control and Prevention.

Social changes across the nation have made the task more difficult, Yu Dongyan, a hospital gynecologist, told China Daily.

"Sex is no longer considered taboo among young people today, and they believe they can learn everything they need from the Internet," according to Yu. "But it doesn't mean they've developed a proper understanding or attitude toward it."

Government statistics show that about 62 percent of the women who have abortions are aged between 20 and 29, and most are single.

The actual number of abortions performed is much higher, Wu said, because the figures are collected only from registered medical institutions. Many abortions are performed in unregistered clinics, according to Wu.

Abortions in China cost about 600 yuan, or $88, China Daily reported.

Some family planning advocates have found it difficult to promote sex education in schools because some teachers and parents believe it will encourage sex activity.

Sun Aijun, a gynecologist at Beijing Union Hospital, said many unmarried couples use condoms, but added that some women find it difficult to turn down a partner's request not to use them.