KABUL, Afghanistan (CNN) -- The U.S. military bombed about 300 tons of poppy seeds in a dusty field in southern Afghanistan Tuesday in a dramatic show of force designed to break up the Taliban's connection to heroin. 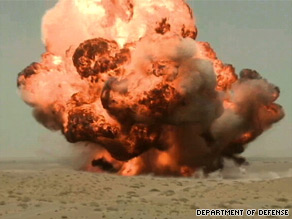 The U.S. military bombed about 300 tons of poppy seeds in a dusty field in southern Afghanistan Tuesday.

The air strike occurred mid-day in Helmand province and was observed by CNN's Ivan Watson, who is embedded with the U.S. Marines operating in that province.

The military dropped a series of 1,000-pound bombs from planes on the mounds of poppy seeds and then followed with strikes from helicopters.

Tony Wayne, with the U.S. State Department, said the strikes on poppy seeds, that can be used to make opium and heroin, is part of a strategy shift for the military to stop the Taliban and other insurgents from profiting from drugs.

"There is a nexus that needs to be broken between the insurgents and the drug traffickers," Wayne said. "Also, it is part of winning the hearts and minds of the population because in some cases they are intimidated into growing poppies."

In a bid to encourage Afghan farmers to swap out their poppy plants for wheat crops the U.S. Agency for International Development has been offering them seeds, fertilizers and improved irrigation.

Observers have noticed a significant decline in the opium trade in Afghanistan, with the number of poppy-free provinces increasing from 13 in 2007 to 18 in 2008, according to a U.N. report released last year.

Opium cultivation in the country, which has 34 provinces, dropped by about 20 percent in a year, the U.N. reported in August.

"It's a challenge to deliver assistance in a war zone -- you can hear fighter jets flying above us right now," said Rory Donohoe, a USAID development officer.

"At the end of the day, what we found is successful is that we work in areas that we can work," he told CNN in a recent interview in Helmand province.

"We come to places like this demonstration farm where Afghans can come here to a safe environment, get training, pick up seeds and fertilizer, then go back to districts of their own."

Watch Afghans speak about the change in their farming practices »

Many of Afghanistan's northern and eastern provinces have already benefited from USAID alternative farming programs, which have doled out more than $22 million to nearly 210,000 Afghans to build or repair 435 miles (700 kilometers) of roads and some 2,050 miles (3,300 kilometers) of irrigation and drainage canals.

Giving Afghan farmers improved access to markets and improved irrigation is successfully weaning them away from poppy production, according to officials at USAID.

Over the years, opium and heroin -- both derivatives of the poppy -- have served as a major source of revenue for the insurgency, most notably the Taliban movement that once ruled Afghanistan.

"If you can just help the people of Afghanistan in this way, the fighting will go away," said Abdul Qadir, a farmer in Lashkar Gah.

"The Taliban and other enemies of the country will also disappear."

Atia Abawi contributed to this report

All About Afghanistan • U.S. Agency for International Development • Helmand Province • The Taliban