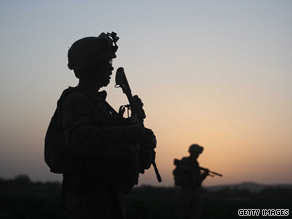 U.S. Marines participate in operation Saturday to push Taliban out of Herati, Afghanistan.

The aircraft was a "civilian contracted" helicopter, not a military one, NATO's International Security Assistance Force said in a statement.

The helicopter was not shot down, ISAF said, adding that the exact cause of the crash was not known.

All the dead were civilians, ISAF said. There were an additional five casualties whose condition was not known, according to the military statement.

Watch report on the crash »

The aircraft "was on a mission to support the peacekeeping forces," an unnamed Rosaviatsia spokesman said, according to Interfax.

ISAF denied the helicopter was shot down in Kunar province, but suggested the people on board were injured.

"Personnel on the aircraft were initially treated on site and evacuated to the nearest medical facility for further treatment," the ISAF statement said.

He said he was "confident" it had not been shot down.

July has been a difficult month for coalition troops in Afghanistan, with 51 international military fatalities, the highest so far, a CNN tally of official statistics shows.

The United Kingdom lost eight troops in 24 hours, and has now had more killed in Afghanistan than in Iraq.

The United States has lost 26 troops this month, putting it on pace to be the deadliest ever for U.S. forces in the country.

All About The Taliban • Afghanistan