Man must choose between selling kidney or child

SARGODA, Pakistan (CNN) -- Mohammed Iqbal said he has been told by his landlord to pay up on debts and is left with a choice facing others in this impoverished corner of Pakistan: Sell your children or a kidney. 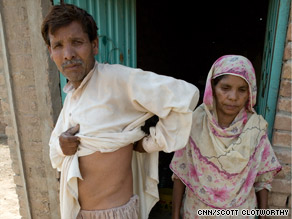 This man's landlord forced him to pay off money he borrowed for his children's medical bills.

For the 50-year-old Iqbal, there is only one option. Despite a law passed in late 2007 banning transplants for money, he has decided to sell his kidney and has already been for pre-operation tests. The sale will net him between $1,100 and $1,600.

"What's incredible here is the law that bans the operation he's going to go through came into place in 2007," said CNN's Nic Robertson. "He's still able to go to a doctor, the doctors given him advice, that's what he has to do under law... He's going to make money out of it 100,000-150,000 rupees, and that is absolutely illegal. Yet, in just a few days, he's expecting to sell his kidney."

Iqbal was not alone in facing this difficult decision. Others in Pakistan's rural heartland have opted to sell their kidneys.

One of them was Rab Nawas, who was deep in debt about a year ago to his landlord after borrowing money to pay for his wedding and to cover medical bills for his wife and six children. He, too, faced the choice: sell his children, his wife or a kidney.

People bearing the tell-tale scar of an organ removal in the villages around the farm where Nawas works are not hard to find. At one point, there were about 2,000 transplants a year -- with 1,500 of them going to what the government said were so-called "transplant tourists."

The 2007 law was aimed at ending Pakistan's dubious status as one of the world's leading organ bazaars.

Nawas sold his kidney after the law was passed and said the procedure was performed at the Rawalpindi Kidney Center in the northern city of Rawalpindi.

When he went to the Rawalpindi center, after CNN asked him to show where the procedure was done, he said a doctor told him they did not have a record of his operation because they destroy such records when a patient leaves.

The Rawalpindi clinic -- which prior to the law was a leading user of purchased kidneys -- told CNN that it abides by the law and does not get involved in deals between kidney donors and recipients.

"Standing there it's hard for me to fully understand the courage it took for him to make the journey. In this country, he has few rights, and even less security," said CNN's Robertson.