HELMAND PROVINCE, Afghanistan (CNN) -- In the largest U.S. military operation since Falluja in Iraq, thousands of U.S. Marines recently poured into southern Afghanistan in a bid to turn the war around, win over the Afghan people and push out the Taliban. 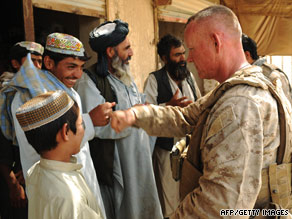 Operation Khanjar, or Strike of the Sword, began in the dark morning hours of July 2, with thousands of U.S. Marines leading an effort to clear and hold villages and districts that were under Taliban control in Helmand province.

"We put about 4,000 marines in there in about a seven-hour period," Brig. Gen. Larry Nicholson of the U.S. Marines told CNN. "The intent was to flood the zone, go big, go strong, go fast and get to the people because the objective here is to get to the people. This is not an operation that was designed to go after the Taliban."

Afghan villagers are skeptical of the intentions of the Marines. They have seen this in the past -- troops coming in, pushing out the Taliban and then leaving. The Taliban have always made their way back, forming their own proxy governments.

"The people are a bit worried that the troops will only be here temporarily and that they may leave again and that the terrorists will come back and bring their force," said Helmand Governor Gulab Mangal. "But I tried to reassure the people that until our own Afghan forces can stand on their own two feet, the international forces will help us."

The U.S. military said they would stay to bring a positive change into the lives of the Afghan people.

"One of the questions the local people are asking is, 'when are you leaving?' And we're not, and that's what makes this different," Nicholson said.

Helmand is considered one of the most volatile regions in the war in Afghanistan. Sharing a porous border with Pakistan, it is also the opium capital of the world.

As we flew into Khan Neshin District in Helmand, we saw acre after acre of dry land; a desolate and remote area where the Taliban have thrived without the interference of foreign forces.

Khan Neshin was under strict Taliban rule for the past three years, said Mayahadeen Ghori, Brigader General of the Afghan National Army.

"You can see with your own camera what terrorism is," he said. "You can see deficient schools, a deficient medical clinic, deficient district, deficient roads. People don't have matter or means of living."

The day we arrived, there was a flag-raising ceremony, with the Helmand governor raising the Afghan flag over an 18th century castle to symbolize new leadership.

Villagers in Khan Neshin, including some village elders, came out during the day to listen to what the governor had to say. They listened to Mangal reassuring that change was coming.

Up until now, the Marines have met sporadic resistance during their offensive, but the fight is expected to get tougher and more complicated as the weeks go by.

"Perhaps the Taliban are also expecting us to leave and I think once they understand we're not leaving they will test us, they will come back at us and they will try to get back to the population," Nicholson said.

There are two major military operations taking place in Helmand. The British led operation, Panchai Palang or Operation Panther's Claw, has been overshadowed by the Marine-led operation. But their mission is the same -- to clear the Taliban out and hold the area.

British troops had taken the lead in Helmand since the war on terror began in Afghanistan, and the majority of their troops were stationed in the province -- but they still were unable to hold key areas because there wasn't enough manpower.

Prior to U.S. President Barack Obama's decision to increase U.S. troop levels in Afghanistan, there were about 7,000 coalition forces in Helmand, primarily British troops; now, there are more than 13,000 in the region.

A large part of the military mission ahead is to win the trust of the people in Helmand, to prevent civilian casualties and to show them that they will stay long enough to build institutions and improve their lives.

This may prove to be the toughest task.

"One of the terms I don't like is hearts and minds," Nicholson said. "I think it's a little bit naive, I think the term we use in the MEB (Marine Expeditionary Brigade) is mutual respect and cooperation. I think that's kind of what we're after. And again, you can surge troops, you can surge equipment but you can't surge trust, personal relationships and cooperation. And it takes time. You gotta drink a lot of tea and eat a lot of goat to earn that trust."

All About Afghanistan • The Taliban • Terrorism • Al Qaeda