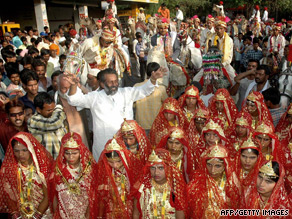 Young Indian men and women are paraded before a mass wedding in 2006 in the village of Funda.

But a district magistrate said the tests were simply "clinical examinations" that were initiated after one of the brides gave birth at a previous mass wedding.

In largely-conservative India, pre-marital sex remains a taboo. In fact, sexually explicit scenes on screen in Bollywood and on television sometimes spark controversies.

The alleged tests happened in Madhya Pradesh state which is controlled by conservative Hindu nationalists who are members of the opposition Bharatiya Janata Party. The controversy is indicative of the row between them and their opponents in the Congress Party, who dominate the federal government.

The National Commission for Women (NCW) said it has also sought a report from the government and police of Madhya Pradesh state, its spokeswoman Kareena B. Thengamam told CNN.

She said the NCW had become aware of reports that some 150 brides-to-be, mostly tribal women, were subject to "virginity tests" before their mass wedding on June 30 as part of a state government scheme.

The watchdog has also formed an inquiry committee of its own.

State authorities, however, denied conducting any virginity tests, but insisted they were "just clinical examinations" before the event.

On its part, Madhya Pradesh state insists the "clinical examinations" aimed to keep the event free from any fraudulent entries -- like women already married, but wanting to get free wedding goodies.

The state government organizes mass weddings involving economically-backward couples, with support worth $130 for each pair. The support is not in cash, but in the form of household articles.

The district magistrate of Shahdol, where the mass wedding took place, said 13 women were found to be pregnant in the examinations, which he claimed followed "routine" questioning about their age and health.

"Another was found to be minor (underage)," Neeraj Dubey added.

None of the 14 was allowed to take part in the mass wedding.

District officials introduced clinical examinations on women wanting to get married in the mass weddings after a participant delivered a baby right at the event earlier, he said.

"But there is no internal examination; it's only abdomen check and that too after some questioning," he claimed.