(CNN) -- A report in South Korean media is fueling the ongoing speculation about the deteriorating health of North Korean leader Kim Jong Il. 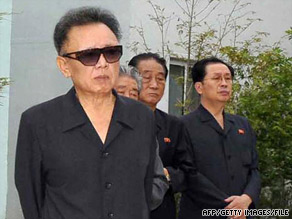 South Korea's Unification Ministry flatly denied the report, which comes a week after a frail-looking Kim appeared in public for the first time in months.

Doctors told South Korea's state-run Yonhap News Agency that it is impossible to tell the status of Kim's health from the recent video of the reclusive leader.

Kim appeared at a July 8 ceremony to commemorate the 15th anniversary of his father's death. He seemed frail and gaunt as he walked into the service flanked by senior party and military officials.

Last week's appearance was his second since he was widely reported to have suffered a stroke in August. Kim was seen in April when he was reappointed as chairman of North Korea's military board.

His recent health problems and long absence from public functions have prompted speculation on whether he was ready to groom an heir.

The rules governing transfer of power in the secretive communist nation are unclear, but it is widely believed that Kim's youngest son, Kim Jong Un, will succeed him.

In April, the North Korean leader named Kim Jong Un and brother-in-law Chang Sung Taek to the country's powerful National Defense Commission. Chang, who is married to Kim Jong Il's sister, has effectively run the country in the wake of the leader's health problems, according to TIME Magazine.

Chang is "the bridge from Kim Jong Il to Kim Jong Un," according to Baek Seung Joo, who watches North Korea at the Korea Institute for Defense Analysis, who spoke to TIME Magazine last month.