WASHINGTON (CNN) -- The United States has dropped its request that two American journalists imprisoned in North Korea be released on humanitarian grounds, and is seeking amnesty instead, U.S. Secretary of State Hillary Clinton said. 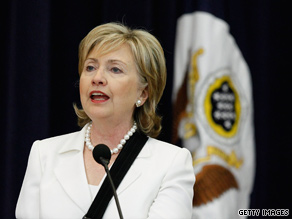 A plea for amnesty implies forgiveness for some offense.

The women -- Laura Ling and Euna Lee -- were sentenced in June to 12 years in prison on charges of entering the country illegally to conduct a smear campaign.

Laura Ling's sister, Lisa Ling, told CNN Friday night that she feels the change in approach is significant, and could aid negotiations for the women's freedom. Lisa Ling is a CNN contributor.

"The two journalists and their families have expressed great remorse for this incident, and I think everyone is very sorry that it happened," Clinton told a State Department briefing Friday.

"What we hope for now is that these two young women would be granted amnesty through the North Korean system and be allowed to return home to their families as soon as possible," she said.

Laura Ling and Lee are serving their sentences in a prison that requires hard labor.

Lisa Ling was able to speak to her sister by phone Tuesday night, according to CNN affiliate KOVR-TV in Sacramento, California.

She told the station that her sister "was very specific about the message that she was communicating.

According to Lisa Ling, her sister told her, "'Look, we violated North Korean law and we need our government to help us. We are sorry about everything that has happened, but we need diplomacy.'"

Ling said that without being able see her sister, it was difficult to tell how she was doing.

The imprisoned women, who are reporters for California-based Current TV -- a media venture of former U.S. Vice President Al Gore -- were arrested while reporting on the border between North Korea and China.

"All we can say is they are journalists and they were doing their job," said Lisa Ling.