(CNN) -- The Pakistan military has declared that not only is it in contact with Afghan Taliban leader Mullah Mohammed Omar but that it can bring him and other commanders to the negotiating table with the United States. 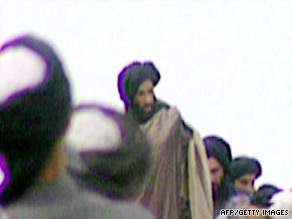 Mullah Mohammed Omar, the Afghan Taliban leader, has been a fugitive from U.S.-led forces since 2001.

The acknowledgment of on-going communication with Taliban forces using sanctuary in Pakistan to launch military strikes against U.S. troops in neighboring Afghanistan is part of a new diplomatic overture to help the Obama administration find an end to the long-running conflict.

But a spokesman for Pakistani Inter-Services Public Relations (ISPR) disputed CNN's report, which was based on an exclusive interview with ISPR director general Maj. Athar Abbas.

In the interview, Abbas said in return for any role as a broker between the United States and the Taliban, Pakistan wants concessions from Washington over Islamabad's concerns with longtime rival India. Read a transcript of the interview

And senior U.S. officials have told CNN the Obama administration is willing both to talk to top Taliban leaders and to raise some of Pakistan's concerns with India.

With ISAF commanders conceding the military fight against the Taliban in key areas of Afghanistan is at a "stalemate" and that a recent influx of American combat troops is hoped to break the deadlock, the consensus among military and diplomatic figures in the region is that the United States cannot win the war in Afghanistan militarily.

Most believe a resolution to the conflict will ultimately be a political, and economic, one rather than a military victory that will necessitate negotiations with the Taliban. Such a resolution will have to be struck with the involvement of Pakistan, India, Iran and possibly Saudi Arabia, as well as NATO and the United States.

And with the Pakistan military, with its intelligence service, the Inter-Services Intelligence Directorate (ISI), now going public with its offer to act as broker to help initiate talks, this could be the first opportunity for a breakthrough in ending the Afghan war that began with the U.S. invasion in 2001.

Abbas told CNN after its "very intense relationship" with militants during the fighters' alliance with the United States during the Soviet war in Afghanistan, the Pakistan military is now still in contact with militant commanders such as Mullah Omar, Jalalladin Haqqani, Mullah Nazir and Gulbuddin Hekmatyar of Hizb-e-Islami.

"That's right, the ISI was in the forefront of the whole struggle against the Soviets. Now, by maintaining the contacts with the organizations like (Mullah Omar's Taliban and Gulbuddin Hekmatyar) doesn't mean that that state policy is (to be) providing them physical support or the funding or training," Abbas said.

After the 9/11 attacks Pakistani policy to support the groups did a "U-turn", he said.

"And the state followed, the army followed, the ISI followed. Having said that no intelligence organization in the world shuts its last door on any other organization. So therefore the contacts are there. The communication remains. But it doesn't mean you endorse what they are doing in Afghanistan. You know you have nothing to do with it because your plate is full."

And even further, Abbas said, the Pakistani military has the ability to get the Taliban to the table with the United States to broker a cease-fire by jump-starting a dialogue between the warring parties, Abbas said.

"That's right. Dialogue," Abbas said. "Eventually, one would have to return to the dialogue table. I think that can be worked out. That is possible."

Retired Gen. Hamid Gul, a former head of the ISI, Pakistan's equivalent of the CIA, is known as the "Godfather of the Taliban." He, too, said talks can be arranged. In terms of U.S. interests in Afghanistan, he said, there is only one man who can make it happen.

"Mullah Omar, nobody else," Gul said.

He insisted the Obama administration, through the Pakistan military, can access Mullah Omar. "Why not?" he said, "Is he a terrorist by any definition? Has he indulged in any act of terrorism?"

Gul added a stated Taliban condition to any discussions, the complete withdrawal of foreign troops from Afghanistan first, was not necessarily a fixed demand and, with concessions from Washington, could be softened and make way for negotiations to begin.

But the ISPR issued a statement that "strongly denied" the remarks made by Abbas "that the Pakistani military is in contact with Taliban leader Mullah Omar and it can bring him and other commanders to the negotiating table."

"The remarks attributed to (the director general) are totally baseless, fabricated and taken out of context and ISPR rejects that," the statement said.

The U.S. envoy for Afghanistan and Pakistan, Richard Holbrooke, told CNN's "The Situation Room that the tight link between the Taliban and al Qaeda makes talks with the Taliban "a non-starter ... unless the Taliban repudiates al Qaeda publicly."

The first response from the Obama administration to the Paksitani army's overture came from Richard Holbrooke, the U.S. special envoy for Afghanistan and Pakistan, who did not find the relationship between Pakistan and the Taliban surprising.

"There's been long allegations that there are continued contacts," he said. "And I think it's a step forward for the Pakistanis to say publicly what everyone has always assumed."

Holbrooke also did not discount the possibility of talks with the Taliban.