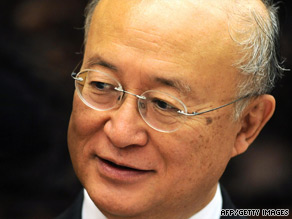 Amano chaired the organization's board of governors between 2005-06.

Amano, of Japan, will replace the current director general, Mohammed ElBaradei, as head of the International Atomic Energy Agency, in November.

The Vienna-based agency aims to guarantee that nuclear programs are not used to build weapons, and helps national governments promote nuclear safety and security.

Amano defeated two other candidates in the secret ballot of 35 members of the IAEA board of governors. The vote was 23-11, with one abstention.

His election will be announced formally on Friday.

Amano is a career diplomat specializing in arms control, according to his biography on the IAEA Web site. He chaired the organization's board of governors between 2005-06.

All About Nuclear Weapons