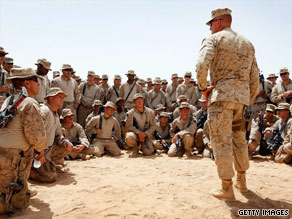 U.S. Marines gather for a briefing in Helmand Province, Afghanistan, on Wednesday.

About 4,000 Americans, mostly from the Marines, and 650 Afghan soldiers and police launched Operation Khanjar -- "strike of the sword" -- in the Helmand River valley, the U.S. command in Kabul announced.

The push is the largest since the Pentagon began moving additional troops into the conflict this year, and it follows a British-led operation launched last week in the same region, the Marines said.

It is also the first big move since U.S. Gen. Stanley McChrystal took over as the allied commander in Afghanistan in mid-June.

In Washington, a senior defense official said the size and scope of the new operation are "very significant."

"It's not common for forces to operate at the brigade level," the official said. "In fact, they often only conduct missions at the platoon level. And they're going into the most troubled area of Afghanistan."

Helmand Province, where much of the fighting is taking place, has been a hotbed of Taliban violence in recent months. At least 25 U.S. and British troops have been killed there in 2009.

The defense official said the operation is a "tangible indication" of the new approach that McChrystal -- a former chief of the Pentagon's special operations command -- is bringing to the nearly eight-year war.

"They're not just doing an offensive push to get bad guys; they're going in to hold the area and stay there," the official said. "This approach is indicative of McChrystal's philosophy: measuring success by the number of Afghans protected, not bad guys killed."

The Obama administration has moved about 21,000 U.S. troops to Afghanistan, the original front in the war launched after the September 11 attacks.

During his confirmation hearing in June, McChrystal told senators that the conflict requires a new focus on counterinsurgency to reduce violence and build support for the U.S.-led NATO alliance among Afghans.

"Although I expect stiff fighting ahead, the measure of success will not be enemy killed. It will be shielding the Afghan population from violence," he said.

The Islamic fundamentalist Taliban ruled most of Afghanistan before its allies in the al Qaeda terrorist network attacked New York and Washington in 2001. Though quickly toppled after the attacks, its leaders escaped, and the movement regrouped in the Afghan countryside and across the border in Pakistan.