(CNN) -- North Korea is warning the world to stay out of part of its eastern waters for 16 days, starting Thursday, saying it will hold a military drill, Japanese officials said. 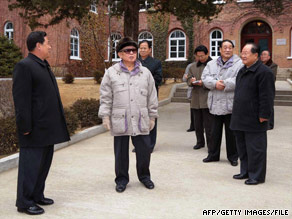 North Korea plans to hold military shooting practice in the waters northeast of Wonsan, on the country's eastern coast, from June 25 to July 10, according to the e-mail, Suzuki said.

The reclusive communist nation did not specify consequences of ships entering those waters during the drill, but the dates fall within the timeframe cited by Japanese media last week for a possible North Korea missile launch toward Hawaii.

The North issued a similar notice before it tested a long-range rocket in April.

Since the April 5 launch, Pyongyang has considered almost any opposition a "declaration of war," including U.N. Security Council sanctions and participation in the U.S.-led Proliferation Security Initiative.

Within two weeks of the launch, the Security Council adopted a declaration condemning North Korea for the move. The North Korean Foreign Ministry said the condemnation infringed on the nation's sovereignty and amounted to a declaration of confrontation and war.

Meanwhile, the U.S. military is tracking a North Korean ship in the Pacific that is believed to be carrying illicit weapons or technology, a senior U.S. official said Thursday.

The U.N. Security Council passed a resolution June 12 calling on all states to inspect vessels suspected of containing contraband. If a ship refuses, it is to proceed to the closest port for a mandatory inspection.

Tension has been rising with North Korea, which in May conducted a nuclear test, fired test rockets and threatened U.S. and South Korean ships near its territorial waters.

That test showed a significant improvement in range from North Korea's initial long-range missile test in 2006.

The Current TV journalists were apprehended near the country's border with China and accused of plotting a smear campaign against North Korea. Lee and Ling were sentenced to 12 years in a labor camp.