(CNN) -- North Korea and its nuclear ambitions are expected to be a key part of discussions as U.S. President Barack Obama hosts the president of South Korea on Tuesday. 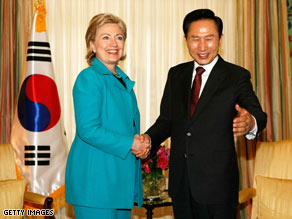 Obama is to meet with President Lee Myung-bak in a closed-door session at the White House on Tuesday morning and then share a working lunch.

The meeting is to focus on how the United States and South Korea can strengthen cooperation on international and regional issues, said White House spokesman Robert Gibbs.

North Korea has raised alarms around the world with its recent nuclear and missile tests, and its statements about strengthening its nuclear capabilities.

Vice President Joe Biden said on Sunday that the United States would enforce the resolution, which calls for stopping arms shipments if necessary.

The 15-0 vote on U.N. Resolution 1874 also imposed an embargo on the shipment of arms from North Korea.

The North protested the resolution by saying it would enrich uranium and weaponize plutonium, according to KCNA, the state-run North Korean news agency.

Obama and Lee's discussions are also expected to cover two American journalists who were sentenced this month to 12 years in prison in North Korea, on spying charges.

Laura Ling and Euna Lee were arrested in March and sentenced after a closed-door trial. The reporters for California-based Current TV -- a media venture of former U.S. Vice President Al Gore -- were arrested while reporting on the border shared by North Korea and China.

U.S. Secretary of State Hillary Clinton has said the United States is seeking the immediate release of the two journalists on humanitarian grounds.