Analysis: The changing fight in Pakistan

ISLAMABAD, Pakistan (CNN) -- Every time I come to Pakistan these days I see more security. 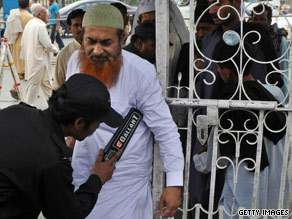 Authorities beefed up security of sensitive locations in Punjab province after a suicide attack.

This time is no exception. On the road from the airport to my hotel I counted nearly a dozen police checkpoints. Two years ago, there were none.

Some police run thorough checks, look inside the trunk, under the hood, peer inside the back of the car, even open the window and ask if I'm OK -- apparently concerned I might be an unwilling passenger, a kidnap victim being taken away. Other police posts are lax, waving traffic through with nothing more than a cursory glance.

It would be foolish to think these are an effective defense against a determined bomber. Indeed, the traffic jams caused by some stop and searches are themselves a target for attackers who seem as willing to murder civilians as they are soldiers, policemen and politicians.

The reality is, a simple knowledge of the back streets is enough to bypass most police barricades. And so it is for the wider military offensive. So vast are the areas the Taliban influence that pinning them down and boxing them in is nearly impossible.

The Taliban and their supporters have become so entrenched in the Pashtu speaking lands bordering Afghanistan and wrapping northwards around the capital Islamabad that no single or even multi-pronged military offensive is going to stop them quickly.

So it is no surprise to come back after an absence of about seven weeks to discover the Taliban have organized themselves in the wake of the government crackdown against their expansionist operations in Swat.

Their depth reaches far beyond the picturesque tourist valley that had become their latest conquest, subjugated to their harsh Islamic rule.

In the past month, the Taliban backlash has grown in sophistication. Tactics mirror those used in Iraq and Afghanistan. Last Tuesday, gunmen shot their way through a checkpoint to set off a massive car bomb close enough to the biggest hotel in Peshawar to kill nine people.

A few days earlier in the same city, attackers threw grenades at a police checkpoint and then waited for emergency service to arrive before the main bomber struck. He waded in the gathering crowd before detonating his explosives.

It doesn't mean the government is slacking off in its crackdown, but its forces can be flatfooted when it comes to responding to what Americans call asymmetric warfare -- historically known as guerrilla tactics. Hit and run.

The army has been targeting the Taliban in a range of attacks, helicopter assaults and barrages of artillery fire. Neither has it the finesse to dislodge an enemy so integrated into the local population.

What is noticeable is that Taliban attackers here are not only becoming more sophisticated but are employing indiscriminate tactics that set them apart from their Taliban brethren across the border in Afghanistan. The bulk of the Taliban's more complex attacks there are against NATO troops, killing almost one a day. Afghan civilians are being killed too but not, it seems, with quite the alacrity of the Pakistani Taliban who killed 8 people with a car bomb in a crowded market here this past weekend.

When I was here in May, the turning point for the government crackdown on the Taliban in Swat came on the back of broad popular and political support as the Taliban broke deals not to take more territory.

With every Taliban outrage since, that same support seems to have been strengthened, giving the government courage to take its fight with the Taliban to the next logical step, broadening the offensive beyond Swat to other Taliban strongholds.

This is a massive undertaking given the thousands of mountainous square miles over which the Taliban hold sway or at the very least have sufficient allies to hide with ease.

So, far from backing down, in recent weeks the army and air force here have opened up a new front against the Taliban. This one is in South Waziristan, home of Baitullah Mehsud, leader of the Tehrik-i Taliban, or TTP.

By conflict, coercion and common cause, Mehsud pushed himself to the top of the Taliban hierarchy in December 2007 -- announcing his leadership of the newly formed umbrella group the TTP. Such is the government's belief he is the man to be toppled if the Taliban is to be defeated. Officials announced over the weekend he is now their number one target.

Killing or capturing him is going to be far from easy. A few years ago, the Taliban captured several hundred Pakistani troops in South Waziristan, only releasing them when Taliban leaders were freed from jail. And even if the army is successful reaching Mehsud, it is unlikely to be a silver bullet solution to the country's woes. The Taliban are so organized that a replacement leader will quickly be found, and even if that person proves unable to unite their numbers, they are more than capable of fighting on under a plethora of lower level commanders.

What I am finding on this visit is as alarming as it is reassuring. Checkpoints are becoming more common, but so are Taliban attacks. The government's commitment to defeating the Taliban appears as firm as it was when it began the Swat offensive during my last visit. But as the contours of the fight become clearer, the prospect of a swift victory looks ever more distant.

All About Pakistan • Terrorism • The Taliban • Afghanistan