TOKYO, Japan (CNN) -- They are young, earn little and spend little, and take a keen interest in fashion and personal appearance -- meet the "herbivore men" of Japan. 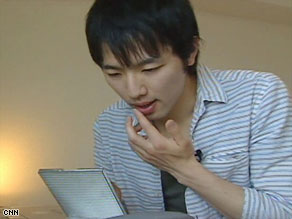 Author and pop culture columnist Maki Fukasawa coined the term in 2006 in a series of articles on marketing to a younger generation of Japanese men. She used it to describe some men who she said were changing the country's ideas about just what is -- and isn't -- masculine.

"In Japan, sex is translated as 'relationship in flesh,'" she said, "so I named those boys 'herbivorous boys' since they are not interested in flesh."

Typically, "herbivore men" are in their 20s and 30s, and believe that friendship without sex can exist between men and women, Fukasawa said.

The term has become a buzzword in Japan. Many people in Tokyo's Harajuku neighborhood were familiar with "herbivore men" -- and had opinions about them.

Shigeyuki Nagayama said such men were not eager to find girlfriends and tend to be clumsy in love, and he admitted he seemed to fit the mold himself.

Takahito Kaji, 21, said he has been told he is "totally herbivorous."

"Herbivorous boys are fragile, do not have a stocky body -- skinny."

Fukasawa said Japanese men from the baby boomer generation were typically aggressive and proactive when it came to romance and sex. But as a result of growing up during Japan's troubled economy in the 1990s, their children's generation was not as assertive and goal-oriented. Their outlook came, in part, from seeing their fathers' model of masculinity falter even as Japanese women gained more lifestyle options.

"Some guys still try to be manly and try to be like strong and stuff, but you know personally I'm not afraid to show my vulnerability because being vulnerable or being sensitive is not a weakness."

Older generations of Japanese men are not happy about the changes. At a bar frequented by businessmen after work, one man said: "You need to be carnivorous when you make decisions in your life. You should be proactive, not passive."

Fukasawa said the group does not care so much about making money -- a quality tied to the fact that there are fewer jobs available during the current global economic recession.

Japan's economy recently saw its largest-ever recorded contraction and has shrunk for four straight quarters. Blue chip companies Sony, Panasonic, Toyota and Nissan all reported losses in May, and most are forecasting the same for the current fiscal year. Though still low by international standards, Japan's reported 5 percent unemployment is the highest since 2003.

Hori agreed economics has played a role. When he finished university, "a lot of my friends were trying to work for a big company that pays well and I wasn't interested in that. I am kind of struggling financially and my father is not very happy about it," he said.

Fukasawa estimated some 20 percent of men are what she would call "herbivorous" and said their attitudes were influencing others. Indeed, she said, it was a return to the norm for Japanese men, rather than a departure.

"It was after World War II and the post-war economic growth that Japanese men gained the reputation as a sex animal through the competition with the West. Looking back beyond that time, older literature talks a lot about men with the kind of character we see in the herbivorous boys."

Will these men simply grow out of this? Fukasawa said it was anyone's guess.

Some of them may, but Japan's image of masculinity is nonetheless changing.