Opinion: The end of revolution

By Victor Gao
For CNN

Editor's note: Victor Zhikai Gao currently practices private equity consulting and serves as a director of the China National Association of International Studies. He was a former employee of China's Ministry of Foreign Affairs and served as interpreter for senior Chinese officials.

(CNN) -- The political events in Beijing in the spring of 1989 culminated in the tragedy on Tiananmen Square on June 4th (the "1989 Beijing Event"). It was one of those historical events which, despite the lapse of time, refuse to free themselves of controversies. Two decades later, emotions still run high in many quarters of the world. 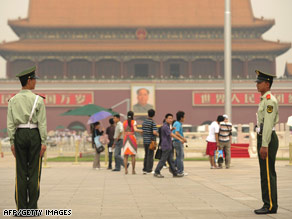 Tiananmen Square -- site of the bloody crackdown on pro-democracy protesters in 1989.

When the 1989 Beijing Event unfolded, I was working in the United Nations in New York. Day by day, I was transfixed with disbelief, unease, apprehension, pain, shock, and eventually devastation. Unlike millions of people around the world who watched the events as outsiders, I knew intimately well the forces on both sides of the political melodrama.

On the one hand, I knew those students in the streets of Beijing. After all, I was one of them just six years earlier; I was among the first batch of college students after the end of the "Great Cultural Revolution" and among the first batch of graduate students to join the Chinese Foreign Service in the early 1980s. Furthermore, while at the Foreign Service, I taught English in my spare time to many aspiring students and regularly gave speeches at universities in Beijing. Having been admitted to Yale as a Ph.D. student in April 1989, I was preparing to resume my student life in the fall that year when the events in Beijing started to unravel. Definitely I could understand and sympathize with those students whose fresh faces and untainted aspirations for their nation became lasting images of an era.

On the other hand, as a top government English interpreter since 1983, I had got to know all those Chinese leaders who were destined to play one role or another in the 1989 Beijing Event. Among them were Messrs. Deng Xiaoping, Zhao Ziyang, Li Peng, Wan Li, Li Xiannian, Yang Shangkun, and Hu Yaobang, whose sudden death in April triggered the events in Beijing. I had interpreted for all of them. I knew their styles, their way of thinking, their personal characteristics, and their inter-relationships. Because I knew both sides, the deteriorating confrontation in the streets of Beijing caused particular pain to me, and I kept praying for calm, reason and conciliation to prevail. When finally tragedy happened, I was devastated, thousands of miles away from Beijing.

The 1989 Beijing Event changed the course of development in China. In the aftermath of the events, the Chinese government had to resort to extraordinary measures to restore order and confidence at home and to repair seriously damaged relations with major Western countries. The subsequent fall of the Berlin Wall and the collapse of the Soviet Union led many outside of China and even some inside China to believe that the tide of history was turning against China.

However, China has bounced back from the dark period overshadowed with perils and risks. What lessons has China learned as a result of the 1989 Beijing Event? Some immediate lessons were so obvious that they might have escaped the attention of the rest of the world.

It is important to note that, even among the Chinese officials, despite their insistence that they had no other choice but to clear the streets and the square of the demonstrators after repeated warnings, no one was happy about how the events were handled. On the contrary, most believed that they could have been handled better. As a matter of fact, just when Beijing was engulfed in deteriorating chaos, Shanghai was confronted with equally explosive massive demonstrations. However, Messrs. Jiang Zemin and Zhu Rongji (then Shanghai's party secretary and mayor, respectively) showed extraordinary leadership and wisdom and diffused the explosive situation, thus averting a major disaster there.

The Shanghai case stood out in sharp contrast with the handling of the Beijing events, and the eventual promotion of Messrs. Jiang Zemin and Zhu Rongji to the top leadership was clearly recognition of and reward for their able leadership. Since then, China has made major improvements in law enforcement, crisis management, crowd control, disaster prevention and disaster relief. China's response to the Sichuan earthquake in May 2008 and the spectacular success of the 2008 Beijing Olympics were examples of how much China has progressed in this regard.

Another crucial lesson China has learned is that political stability is of paramount importance. Without such stability, China would never have been able to achieve its astounding economic miracles. By now, China has become the third-largest economy in the world, with the largest foreign reserves. China has uplifted more people out of abject poverty than the total number achieved by Europe and North America as a whole throughout the Industrial Revolution. China has learned to play an important role as a reliable, constructive and responsible stakeholder in world peace and development. Given the extraordinary share of foreign trade in its overall economy (as high as up to 65 percent of its gross domestic product), China has become a champion of free trade and strong opponent to protectionism.

Despite many doubts, criticisms or even condemnation from abroad, a more open and transparent society is emerging in China with more civil liberties than just 30 years ago. Whereas there are some governments in the world which dare not allow their people to use Internet and mobile phones, China now has the largest mobile phone population and Internet population in the world.

However, the most important lesson we have learned as a nation as a result of the 1989 Beijing Event is that China cannot afford another revolution. This does not mean that what happened in Beijing in 1989 was a revolution. Far from it. Although many forces out of China have used "democratic spring," "anti-corruption movement" or even "half revolution" to describe the events, no one has seriously called the events a "revolution."

China cannot afford another revolution partly because for almost 140 years between the First Opium War in the 1840s and 1978, when China started the reform and opening to the world, China had had too many revolutions, in addition to civil wars, foreign aggressions, and many other man-made disasters. Because history did not end with the 1989 Beijing Event, or with even the collapse of the Soviet Union, when we look back at the past 20 years, we can conclude that China cannot afford another revolution, like those which happened in the former Soviet Union and its socialist camp, because a revolution will deprive China of political stability and, in its turn, will ruin almost all of China's economic achievements during the past 30 years.

What are the implications of this important lesson? On the one hand, the ruling party and the government in China (more or less the two sides of the same coin) cannot afford to be complacent because China does not have a perfect political system -- which country in the world can claim to have one? -- and China needs to spare no effort to constantly learn from other countries so long as their experiences can help China increase productivity, improve the livelihood of the people, and promote greater democracy and human rights.

In this regard, the extensive effort at promoting greater democratic participation in political activities at various levels in China, and the recent publication of the Report on Human Rights Development in China by the Chinese Government, are encouraging developments in the right direction. The rest of the world should be encouraged that China has great humility and eagerness to learn and innovate, and will keep promoting both economic reform and political reform. China should also spare no effort in fighting corruption of any form, because corruption of party officials, government officials, state-owned enterprise officials and their relatives and cronies may become the ultimate nemesis of political stability and the viability of the political system in China.

On the other hand, China as a nation should stand united and vigilant against any attempt to overthrow the government through a revolution or to launch a revolution which may ultimately result in the overthrow of the government. This is because, unlike the United States, in China the ruling party, the government, the political system, the regime and China as a sovereign nation are all intricately interrelated with each other, and pulling away one block may cause the collapse of the whole order.

Whatever unhappiness, complaints, or grievances we may have, we need to resolve them on the basis of maintaining rather than undermining political stability. Whatever political pursuits, experiments and innovation we conduct, we cannot do so at the cost of political stability. United, our nation of 1.33 billion people will overcome difficulties and challenges and make great contribution to world peace and development. But divided, for whatever reasons, including seemingly harmless motivations, we as a nation will not only fail our own expectations, but may inflict great havoc to the rest of the world.

As China pursues economic development, it will build up its own democracy and human rights in peaceful ways rather than through a revolution. Thus, the end of revolution in China. Both China and the rest of the world will be better off as a result.