(CNN) -- With their nation under high security alert, South Koreans mourned a former leader at a funeral ceremony Friday morning. 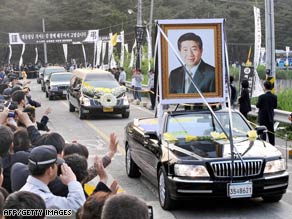 South Koreans poured into the streets to catch a glimpse of the black Cadillac making a five-and-a-half hour journey from Roh's home in the village of Bongha to the capital.

Some bowed their heads or wept openly. Others, still stunned from the loss, stood quietly in black as the hearse drove by.

Scores of Roh's supporters handed out yellow balloons, the color associated with Roh's political campaign. Other supporters had posters of Roh's image that read, "President in my heart" and "You are my president."

A person who walked by Roh's memorial site said, "Roh understood the difficulties of normal people. We feel he acted like a shield for people with no power. He was the people's president."

One woman on her way to work in Seoul said: "He was the first president South Koreans picked with their own hands." She was referring to the fact that Roh didn't have a big political machine behind him. He won the election in 2002 by razor thin margin and his appeal was that he related to the common person.

This week has been marred by grief and tension for South Koreans as they grappled with Roh's sudden death and renewed threats from North Korea.

Following the official ceremony, Roh's body will be taken to the plaza in front of Seoul's city hall, where large crowds are expected to say goodbye to a beloved leader.

He will be cremated later Friday and the remains carried back by hearse to Bongha.

Roh, who served between 2003 and 2008, jumped from a hill behind his house last Saturday, government officials said. His death came amid an investigation into a bribery scandal that had tarnished his reputation.

However, tens of thousands of people have visited memorial shrines for Roh, laying white chrysanthemums in a traditional show of grief and leaving cigarettes on the altars to remember a man who was reported to have taken up smoking during the investigation.

In a suicide note given to the media by his lawyer, Roh wrote: "I am in debt to too many people. Too many people have suffered because of me. And I cannot imagine the suffering they will go through in the future."

Why some South Koreans are angry about Roh's death »

The investigation has now been suspended.

The debate over Roh's suicide has occupied as much column space in South Korea's press as the recent aggressive behavior shown by the North. On Tuesday, the conservative Chosun Ilbo urged South Koreans to remember the words of the former president's suicide note.

It also criticized prosecutors who "seem to have worried about public consensus rather than focusing on principles."

"The case of late President Roh was the most unfortunate in South Korean history, brought about by the Lee Myung-bak administration, which despised the person more than the crime," the newspaper wrote in an editorial.

Just before he left the presidency, Roh became the first South Korean leader to cross the demilitarized zone and meet with North Korean leader Kim Jong Il. He believed in the "sunshine policy" of his predecessor, Kim Dae-Jung, that sought to engage the north, and Roh also promised aid.

All About South Korea • Roh Moo-hyun