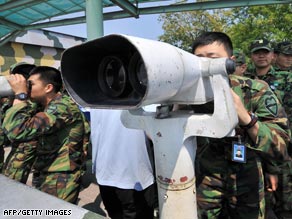 South Korean soldiers use binoculars to look at North Korea on Wednesday in Paju, South Korea.

The "Watchcon" alert was raised to its second-highest level on Thursday, a government spokeswoman told CNN.

The last time the joint forces raised the surveillance alert was after North Korea's last nuclear test in 2006, according to South Korea's Yonhap News Agency.

The separate five-stage combat alert level, known as "Defcon," has not changed and remains at stage 4, South Korean defense spokesman Won Tae-jae said at Thursday's briefing, according to Yonhap.

"Additional intelligence assets, including personnel, will be deployed while reconnaissance operations over North Korea will increase," Won said, according to Yonhap. He declined to give specific details, the news agency said.

There has also been recent activity at North Korea's Yongbyon nuclear facility, according to U.S. officials, who cited information from U.S. spy satellites. The officials would not speculate about the type of activity.

CNN's Barbara Starr in Washington contributed to this report.