(CNN) -- A white tiger mauled a zookeeper to death at a New Zealand wildlife park Wednesday as a group of tourists watched in horror, police say. 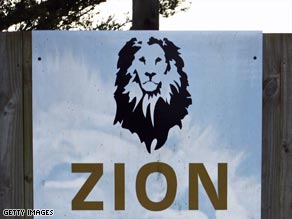 The zookeeper at Zion Wildlife Gardens in New Zealand could not be saved by other staff.

The attack took place at the Zion Wildlife Gardens near Whangarei, about three hours north of Auckland.

Two zookeepers had gone in to clean an enclosure at the park, when one of two white tigers inside lunged at a keeper, said Sarah Kennett, spokeswoman for Northland Police.

The second keeper and other zoo staff tried to pull the tiger off the man but failed. He died shortly after, Kennett said.

The tiger was put down, the park said.

A group of eight tourists who were on a guided tour of the park witnessed the Wednesday morning attack, Kennett said.

"This is an incredibly sad day," the park said in a statement, adding that it would provide counseling to its employees.

The Zion Wildlife Gardens is home to several endangered tigers and lions. It is best known in New Zealand as the setting for the popular television series "Lion Man."

In February, an employee needed surgery after he was attacked by a white tiger, according to local media reports.

Last year, the country's Ministry of Agriculture and Forestry released documents to CNN affiliate TVNZ that said animals at the park were kept in crowded, unsanitary conditions.

Inspectors were so concerned about the conditions that they considered having 40 cats put down, the documents said.