Myanmar's Suu Kyi: I did not violate house arrest

YANGON, Myanmar (CNN) -- Opposition leader Aung San Suu Kyi took the stand for the first time Tuesday and told a Myanmar court that she did not violate her house arrest when she offered temporary shelter to an American man who swam to her lakeside home. 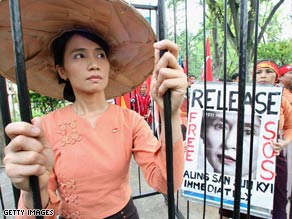 People of Myanmar living in Japan protest for the release of Aung San Suu Kyi on Sunday in Tokyo, Japan.

"She was very confident, very firm, very clear," said Mark Canning, the British ambassador to Myanmar, who was among diplomats and journalists allowed to watch the proceedings.

"In a strange way, she commanded the courtroom," he said.

Suu Kyi, who is being tried on subversion charges, said she did not learn immediately that John William Yettaw swam nearly two miles and snuck into her crumbling, colonial-era bungalow on May 3.

She was told about the visitor the next day by one of two housekeepers who are her sole companions in the heavily guarded residence, where she was under house arrest.

Suu Kyi's two helpers are also on trial, as is Yettaw.

Under questioning by a judge for half an hour, Suu Kyi said she provided Yettaw food but allowed him only to "stay temporarily."

Yettaw left late May 5, she said.

"He walked to the lakeside. But I don't know which way he went, because it was very dark," Suu Kyi said.

The Nobel Peace Prize laureate also acknowledged that Yettaw, a 53-year-old former military serviceman from Falcon, Missouri, had visited her once before last November.

"Did you report to the authority about his arrival?" the judge asked.

Suu Kyi had earlier told supporters that she did not tell authorities about the latest intrusion because she didn't want Yettaw or anyone else to get in trouble.

But it is this silence that the Myanmar's military junta is trying her for.

The country's regime rarely allows Suu Kyi any visitors, and foreigners are not allowed overnight stays in local households without government permission.

Suu Kyi has been under house arrest for 13 of the past 19 years -- a confinement the military junta has regularly extended.

Her latest round of home detention -- after five years of confinement -- expires Wednesday, according to her supporters at home and abroad.

Last week, the military began prosecuting Suu Kyi on allegations of subversion at a prison compound near Yangon.

Her supporters say the move is meant to keep her confined even longer -- beyond the general elections that the junta has scheduled for next year.

If convicted, Suu Kyi, 63, could be sentenced to three to five years in prison.

Before the proceedings got under way at the Insean Prison compound Tuesday, the junta said Suu Kyi's house arrest did not expire for six more months.

And though the government said it considered releasing her at the end of the term, it said it had no choice but to try her after she met with Yettaw.

"As Aung San Suu Kyi is the daughter of Gen. Aung San, the leader of our country, we were deeply thinking whether to extend her detention or not," Police Brigadier General Myint Thein told reporters Tuesday. "Unfortunately, a U.S. citizen entered her house for two days. She allowed and made conversation with him, gave him food.

"These kind of actions broke the law," he added. "This is why we have no way but to open a case. And we are very sad about this case."

Gen. Aung San played an instrumental role in bringing about the country's independence from British colonial rule. He was assassinated in 1947 and is still revered in Myanmar.

"The U.N. has said her house arrest expired a year ago," said Jared Genser, her U.S.-based lawyer. "They are out of time, and they cannot detain her any longer under their own law."

Thein told reporters that the pro-democracy advocate had actually been under house arrest for four-and-a-half years.

The official said Suu Kyi's house arrest officially went into effect on November 28, 2004. That gives the government six more months to restrict her movement, he said.

The law is unclear whether detention begins from the time a person is arrested or when a detention order is issued, the council said.

"This would suggest an interpretation that you start counting from the day you begin to detain her," Genser said.

"You can't issue an order months later and use that as your starting point. That creates an unfair period of detention," he said.

After Suu Kyi's testimony Tuesday, the court asked the diplomats and journalists to leave. It denied a defense request to consult with Suu Kyi privately.

The court then questioned Yettaw.

He is charged with violating immigration laws and trespassing. The charges carry a maximum sentence of five years in prison.

A lawyer selected by the U.S. Embassy is representing him.

According to Yettaw's testimony in court Friday, he made the unauthorized trip because he had a vision that Suu Kyi would be assassinated, and he wanted to warn her.

He muttered to himself during the proceedings, including utterances that Suu Kyi is innocent, said Nyan Win, spokesman for Suu Kyi's National League for Democracy.

U.S. Secretary of State Hillary Clinton called the charges against Suu Kyi "baseless" and accused the junta of "continuing resistance to a free and open electoral process."

The Nobel laureate has been the face of Myanmar's pro-democracy movement and the focus of a global campaign to free her.

Her party won over 80 percent of the legislative seats in 1990. But she was disqualified from serving because of her house arrest, and the military junta ignored the results.

The government has said next year's scheduled elections will reintroduce democracy in Myanmar.

But its plan includes a clause that forbids citizens who bore children with foreigners from running for office. That makes Suu Kyi ineligible. She married a British man and has two sons with him.

CNN's Kocha Olarn and Saeed Ahmed contributed to this report.