(CNN) -- The United Nations is demanding full access to refugee camps that are home to an estimated quarter of a million people fleeing war in Sri Lanka, the United Nations Children's Fund said Tuesday. 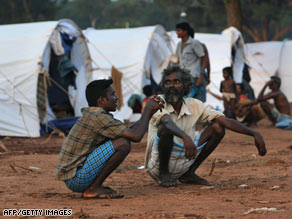 Displaced Tamil civilians at Manic farm in the northern Sri Lankan district of Vavuniya on May 7, 2009

"People are arriving into camps sick, malnourished and some with untended wounds of war," UNICEF Executive Director Ann Veneman said in a written statement. "... Water and sanitation needs are critical."

About 65,000 people have fled what had been the fighting zone in northeast Sri Lanka over the past few days, the United Nations said Monday, bringing to 265,000 the number of internally displaced people.

The refugees were trying to escape what appear to be the final days of one of the world's longest-running civil wars.

"We are celebrating the defeat of terrorism," he said in a nationally televised speech before parliament. "We have won and restored democracy in the country."

A short time after the presidential address, the military announced that it had recovered the body of Tamil Tiger founder and leader Velupillai Prabhakaran. A local television station aired video it said showed his body.

The "psychopathic leader of the world's most barbaric terrorist outfit ... has been found," said Gen. Sarath Fonseka, commander of the Sri Lankan army, according to the Ministry of Defense Web site.

But earlier in the day, the pro-rebel Web site TamilNet reported that the Tigers' leader was "alive and safe," countering previous military claims.

The Defense Ministry said Prabhakaran and 18 other senior rebel leaders were among the bodies found in mop-up operations, after government troops routed the Tigers -- formally known as the Liberation Tigers of Tamil Eelam.

CNN has been unable to independently confirm the accounts because of access and safety reasons.

International aid agencies have been trying to provide services to the hundreds of thousands forced out of their homes by the violence.

But "it is reported that access to some camps for internally displaced persons within Sri Lanka has become restricted," UNICEF chief Veneman said, prompting her call for full access.

The Office of the U.N. High Commissioner for Refugees on Monday vowed to erect an additional 10,000 shelters to accommodate people streaming from the combat zone.

It reiterated its request for the Sri Lankan government to set aside land for the construction of emergency shelters, water and sanitation facilities and public buildings in Vavuniya, Jaffna, Mannar and Kilinochchi.

And it called on the government to improve conditions at 42 sites already hosting displaced people and to ensure they be adequately cared for.

But the United Nations said its access to the sites in Vavuniya had been curtailed in recent days "and this affects our ability to monitor and distribute aid to the displaced. We hope this ends quickly."

Suresh Bartlett, Sri Lankan director for aid agency World Vision, said, "The conventional war may be over, but the real challenge now is to foster an environment where fractured and displaced Tamil communities can heal and have a real chance at creating a future for themselves and their children."

Among the pressing issues, he said, is getting people as quickly as possible back to their land and homes. In some cases, that will require that land be demined and buildings be repaired, he said.

About 80,000 of the displaced -- a third of the people in camps -- are children, who need emotional, psychosocial and educational support in addition to physical aid, he said.

Estimates put the number of civilians killed in the conflict at 70,000 to 80,000 since it began in July 1983, but Bartlett acknowledged that the true number may never be known.