BUENOS AIRES, Argentina (CNN) -- A day after police arrested five people in what authorities described as an anti-Semitic demonstration that turned violent, Jews expressed concern Monday over the attack. 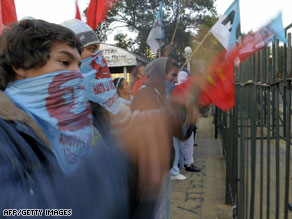 The attack occurred outside the Israeli embassy as members of Argentina's Jewish community, celebrating the 61st anniversary of the state of Israel's founding, were confronted by a gang of youths.

"They came equipped for that," said Daniel Gazit, Israel's ambassador to Argentina, who witnessed the incident in which three Jews and a policeman were injured -- none seriously.

"They came with their clubs, with their arms, one had a knife, one had a pistol -- they came ready for this," Gazit said. "It was not a political demonstration ... this was violence for the sake of violence."

Witnesses said the attackers were between the ages of 15 and 20. The five who were detained were to make their first court appearance on Tuesday.

Some people complained about the lack of security measures in place at the time of the pro-Israel demonstration and denounced the secretary general of AMIA, a Jewish community center in Buenos Aires, for having allowed a type of "liberated zone" from which the group attacked.

"There were a lot of police in that place," said Anibal Fernandez, the minister of justice. "Some uniformed, others not, and that allowed them to rapidly arrest five of them."

Fernandez described the act as anti-Semitic, but denied Argentina was experiencing a surge in such sentiment. He blamed a small group for the incident.

But for some people in Argentina's Jewish community, this and other recent acts, like the appearance of swastikas painted in a cemetery, have raised concerns.

The Israeli government, through the chancellery, demanded that the incident be investigated and that those responsible be severely punished to avoid a recurrence of such acts.

All About Racism and Bigotry • Hate and Extremist Groups • Israel