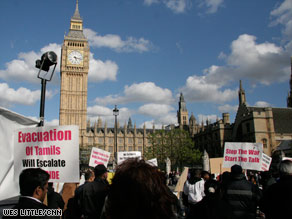 Protesters demonstrate in front of British Parliament in support of Tamil rebels in Sri Lanka.

The report, aired Tuesday on Channel 4, chronicled the alleged abuse of Tamils in internment camps in the city of Vavuniya in northern Sri Lanka, where fighting has raged between government and rebels.

The report alleged that "dead bodies were left where they fell, shortages of food and water, and sexual abuse," ITN says. The government denied the claims.

Asia Correspondent Nick Paton-Walsh, a cameraman and a producer were arrested by police and were in the process of leaving the country, Channel 4 management said.

Officials discovered that Paton-Walsh consistently filed fabricated stories and has tarnished the country's image, according to a government Web site.

Watch reaction to allegations of abuse by the military »

Channel 4 said the team -- which had been in the country with valid visas and had been reporting there independently for a couple of weeks -- has been told to leave the country.

"We will be seeking an explanation from the Sri Lankan government for this decision," an ITN official said.

As many as 70,000 people have been killed since the civil war began, and the group has been declared a terrorist organization by the European Union and more than 30 countries, including the United States.

Sri Lankan government troops have pinned down Tamil Tiger rebels in a small section of the country's north. Civilians trapped in the crossfire have been attempting to flee.